The Future of Economics: Prepare for the new herd of economic sharks

The Future of Economics: Prepare for the new herd of economic sharks

The Future of Economics is now. The economic system is an important factor to nurture from a small point Like individuals like us Expose to families, countries, regions, and the world. How did COVID change the economic system? Has anyone got or has lost? And what other factors affect the economy at both the individual and organizational levels? Is there anything that we, as a person and a part of the mechanism to drive the economy requires adjustment both the mind and behavior. Including what we must learn to live and win in the New Normal economy. Listen to opinions and views from Dr. Chai or Dr. Sittipon Wibunthanakun. Who is an expert in economics and the author of the book "Opportunities for the future" and is a talented person, making economics easy to understand and fun. 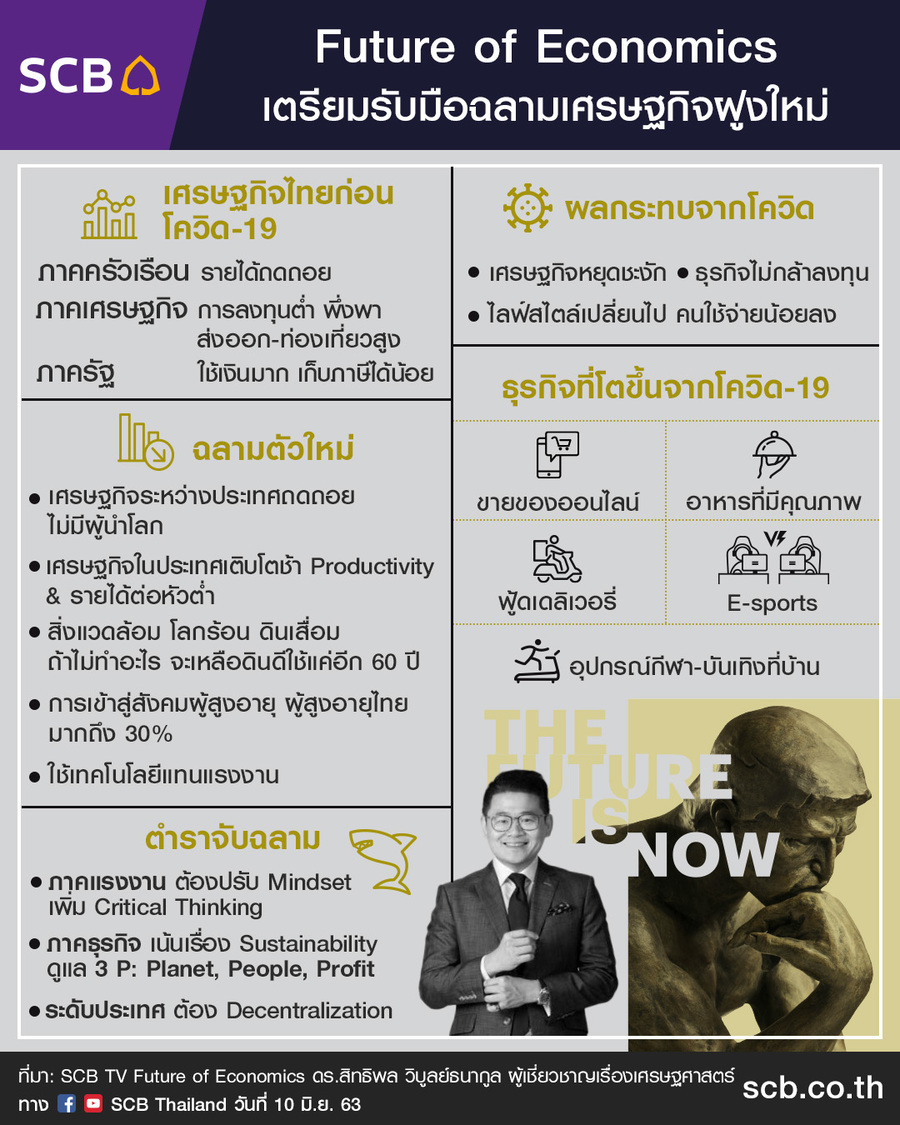 During the 2-3 years before the COVID crisis The Thai economy has a relatively low growth compared to other countries in the same region. In which Thailand grew only 3.5-4%, while neighboring countries such as Vietnam grew 6-7%, Malaysia grew 5-6%. Called that even without the COVID, the Thai economy has grown low for a while. But looking back, about 10 years before the crisis of Tom Yam Kung in 1997, the Thai economy has grown to 10%. Foreign countries are even called the Miracle of Asia. Another 10 years, 1998-2007, before the hamburger crisis in the United States, Thailand grew by 5%. Will see that the growth rate is reduced by half. And after the Hamburger Crisis in 2008, until now, growth has decreased by half, to just 3%. Will see that the Thai economy is declining steadily Until now being called "Asian patients" When COVID entered, the situation collapsed again. The problem can be seen in both the household and business sectors. Household deflation income, the agricultural sector, which constitutes 30-40% of the country's total labor, has a steady decline in income. Crop price fluctuations Including the uncertain income problem that is getting worse. Which partly comes from climate fluctuations. Concerns about household debt increase are worrisome because it increases from 50% to GDP to 80% per GPD. And found that Thai people in debt are younger. Half of the 30-year-olds already have debt and 1 in 5 of the debt and is NPL. Causing the overall quality of life of Thai people to be poor. Because earning less money and having to use the money to pay off debt. And found that most retirees still have debt. Is it a burden for the children to pay debt Which makes the overall picture of the Thai household sector not very strong?

Economic sector Low investment, labor does not increase wages. Resulting in lower consumption capability. Finally, the dependency of the Thai economy is the government that requires money to stimulate the economy. And another part that helped boost the economy in the past before COVID were exports and tourism that helped support the economy. But when there is a trade war between China and the United States, causing the global economy to slow. Therefore, affecting Thai exports. Resulting in only the government remaining able to stimulate the economy. While having to spend money to inject into the system But because of the lower-income, the increase in taxes is therefore difficult. Therefore, waiting for government assistance is not a sustainable solution.

Thai economy and the impact of COVID

COVID greatly affects the Thai economy. Because we rely heavily on exports and tourism. Once the lockdown occurs, we can export less, lost tourism. Which we rely on tourism income to 10% of GDP. When locking down from COVID, the business was stopped. Broken purchasing power Which still does not count businesses in the shadow economy. Such as night business, pubs, bars, gambling businesses that had to close. Which causes a lot of lost revenue in the system. In addition to having a negative impact on the economy still affecting lifestyle. Having to stay at home causes less shopping. Plus, the cost of living more Such as masks, hand washing gels. The department store business also has lower incomes, but costs have increased from measures such as Social Distancing. Including the business is uncertainty, no one dares to invest. Don't know when the situation will end and don't know what the future will be. Which affects almost all business sectors. In Asian countries, we have the most contraction because of our dependence on exports and tourism. It is predicted that the economy will be negative from 5-8% of GDP.

Businesses that benefit from COVID

Overall, a business that can change the lives of consumers from offline to online. Because people are locked down like

Business models or marketing methods must change. Because people decide to buy now has changed from the original, for example, their children manage online shopping in the house instead of parents who are not familiar with technology, etc.

1. The international economy is declining. Ajarn Chai said that in the past, the global economy was better than this. World trade has a good turnover. But now there is more protection in the trade, such as the Brexit case. In the past, we have always been leaders of world economies such as the United States, Europe, the WTO, or the IMF that promote a free-trade economy. When the Hamburger Crisis came to an end in 2008, the American economy went into recession. By the year 2011, Europe has a public debt problem. Causing the once-declining country to become unable to be the main consumer of the world. Because before 2008, America and Europe were the main consumers of Thailand. But now these countries import less. Thailand relies on new economic countries such as China, India, Russia, and rising Brazil. And there are many consumers. Therefore, have these countries to help support the global economy. But now the economies of many countries are worsening, including China, Russia, and Brazil. Only India is still strong. But only India alone cannot help everyone. There is currently no country that will lead the world economy as before. The belief in free trade has changed. Every country protects itself more.

2.Domestic economy: In fact, the economic perspective is more interested in the quality of life than GDP. Which is to make Thai people have a better life. Which means having more GDP per capita, to have the ability to consume more. Looking back at 40 years, the per capita income of Thai people is 3 times more than China, but from 2010 -2011 onwards, now, the per capita income of Chinese people has overtaken us. Our income per capita increases but slowly increases. While other countries increased at a faster rate. Therefore, slowing access to the quality of life of Thai people. 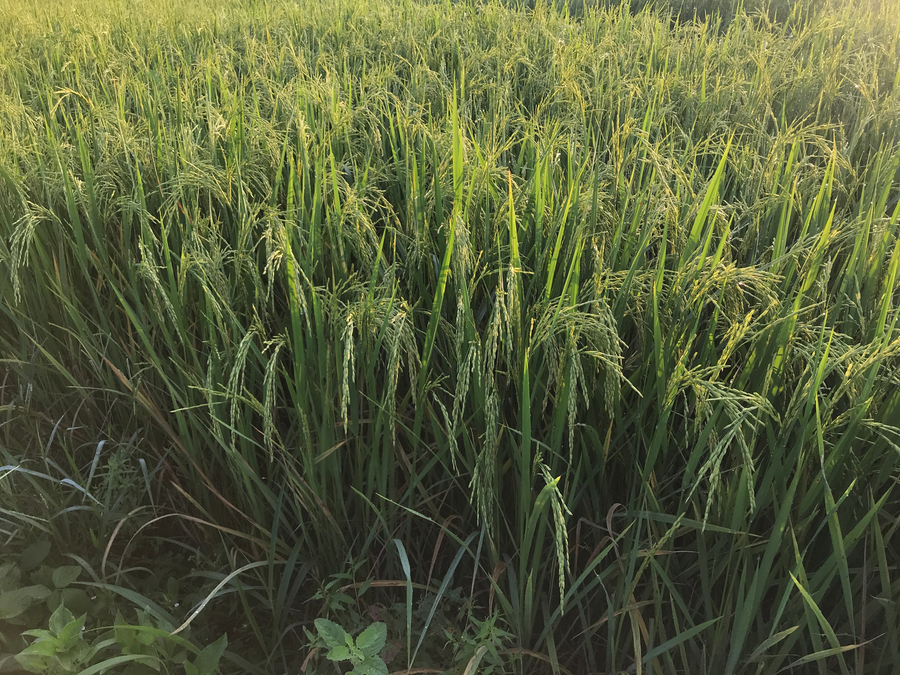 What are the factors that make you eat well and increase your income every year? The answer is that the ability to produce products and services must improve. Which the productivity of Thailand compared to other countries we increased more slowly than others, causing our income to increase more slowly as well. Such as rice cultivation, currently, we are the lowest rice yield in ASEAN. One reason may be that because Thai rice is of high-quality Low production but has a good price. Said that our rice is more delicious. But if compared with similar terrain Similar rice varieties Similar quality Which if compared with Laos Rice yield per rai of Laos is higher than Thailand. This means that both the quantity and quality, we have a lot of problems. Is an example of reduced competitiveness. And occurs in many products is not just rice. Many products that we used to sell before, but today do not sell. Like in the past we used to sell parts for desktop computers. But when smartphones grow, we do not have products that meet their needs. We produce fewer products that the world needs.

3.Environment, natural resources: Good quality soil deteriorates every year 30% of good quality soil is gone. The question is why it disappeared. The answer is, for example, we are contaminated in the soil, deforestation. When forests reduce soil quality, they deteriorate, heat, climate change, the world's temperature keeps rising. The rising of the sea, which affects many things, such as lost agricultural land Soil quality becomes saline. The quality of the soil deteriorates every year. If we do nothing, we will leave the soil well, only use for 60 years. Thailand is very dependent on soil. Make the ability to grow worse. The ability to produce products is reduced. 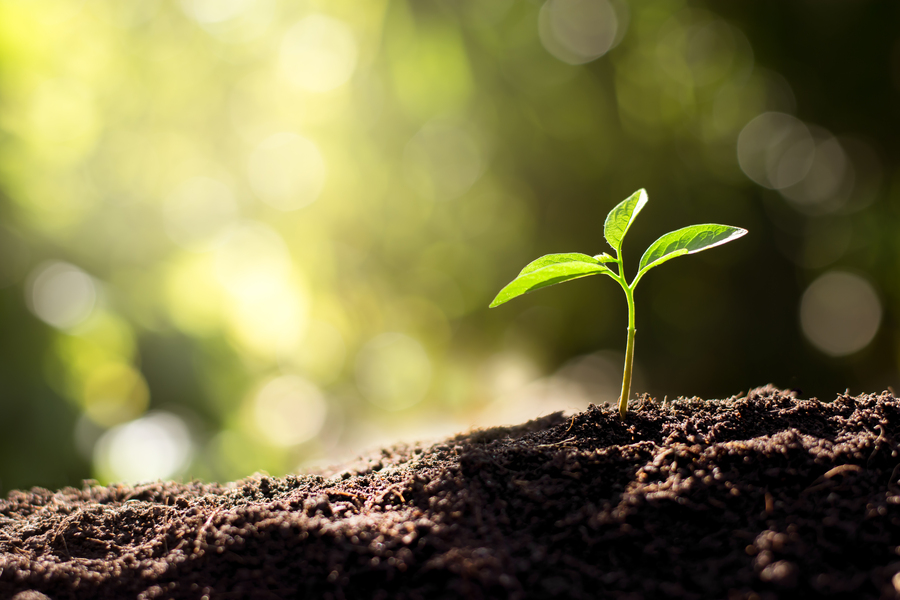 Global warming (Climate change) more frequent natural disasters. ADB Education, Asian Development Bank estimates that every 1 degree Celsius at higher temperatures Rice yield per rai will decrease by 10%. Therefore, Thailand, which is an agricultural country, will be very affected by both global warming and soil deterioration problems. Which is a problem that has accumulated continuously but there is no host to seriously solve the problem

In the next 30 years, the world's population will increase. We need 70% more food. But the global warming problem and soil quality deterioration, resulting in decreased agricultural productivity. Resources are getting more and more limited. Or tiny dust problems. PM 2.5 also reflects that our focus on industrial production, regardless of the environment Finally, we were charged the price. There is a study in the next 40 years if we do nothing with the dust. The cost of treatment will increase by 8 times. Children with respiratory diseases will increase by 3 times and the productivity will decrease. Tiny dust is occurring all over the world. But people affected are not equal. According to the research, 90% of the population in developing countries face the danger of toxic dust Children under the age of 5 in low-income countries are 60 times more likely to die than wealthy countries.

We live in an era of technology disruption such as google map, Uber, Airbnb as an example that changed the world. Many things are happening a lot when compared to the olden days, such as the production of light bulbs or the industrial revolution. But in the 4.0 era, many technologies occurred simultaneously, many professions in the future may not exist anymore. Children who are studying at university today before retiring may have to change more than 5-6 jobs. Because the career will always be ruined technology will compete for a career. Children who are born today do not yet know what future career they will do. Because the profession has not yet appeared, these things will be both opportunities and risks. It's both a benefit and a penalty.

3 Risks that entrepreneurs need to keep in mind 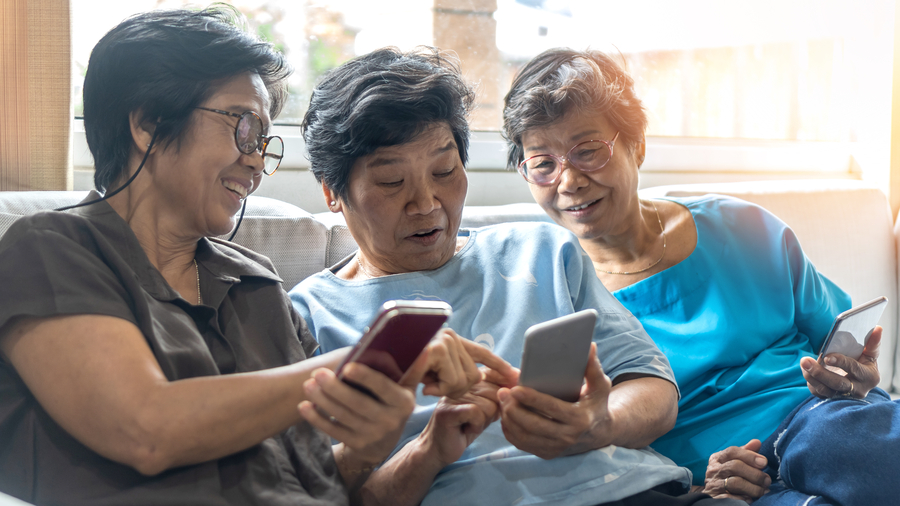 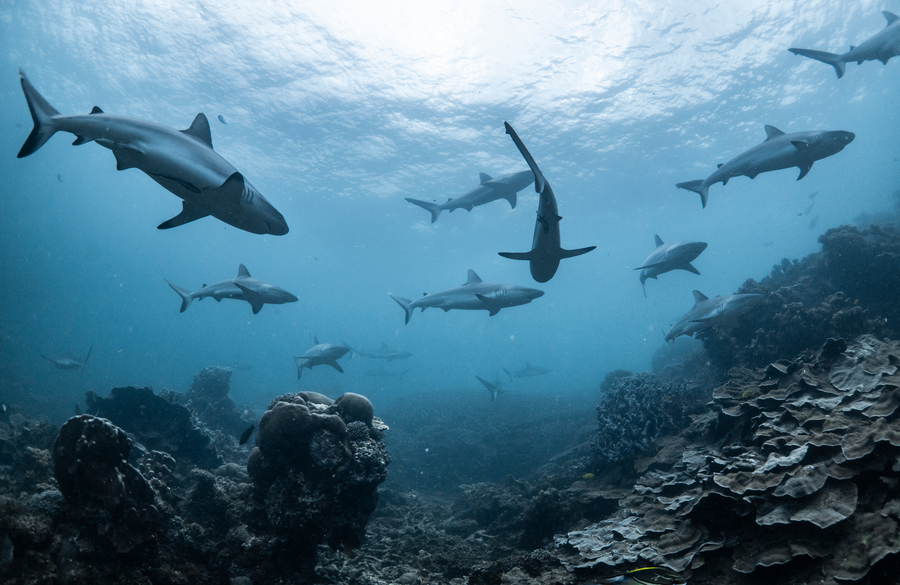 Opportunities and challenges are everywhere. Fragility and problems may have already accumulated without knowing it. When there is a crisis in which to ignite, it may be an advantage for us to study and understand more about ourselves, our weaknesses, our strengths. Self-development to keep up with the world, keep up with technology, adjust the mindset, and analytical thinking skills. Accepting problems and adjusting before everything is too late can be a way for us to increase our competitiveness, whether at the personal level or at the corporate level. Combine, modify and correct today before everything is too late