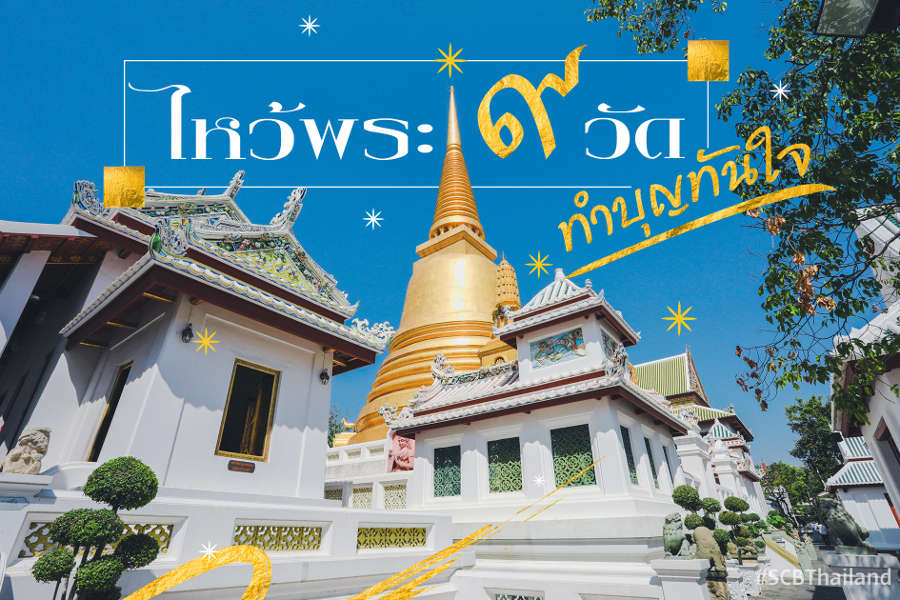 Sometimes, we want to relax, boost our lives, advance in work and business as well as overcome all problems and obstacles. It must be nice if we can make merit and strengthen our soul. If you have had those thoughts, we recommend the trip to 9 temples in Bangkok. Not only it is easy to travel and can be done within a day, you can choose to either to visit on weekends or weekdays. 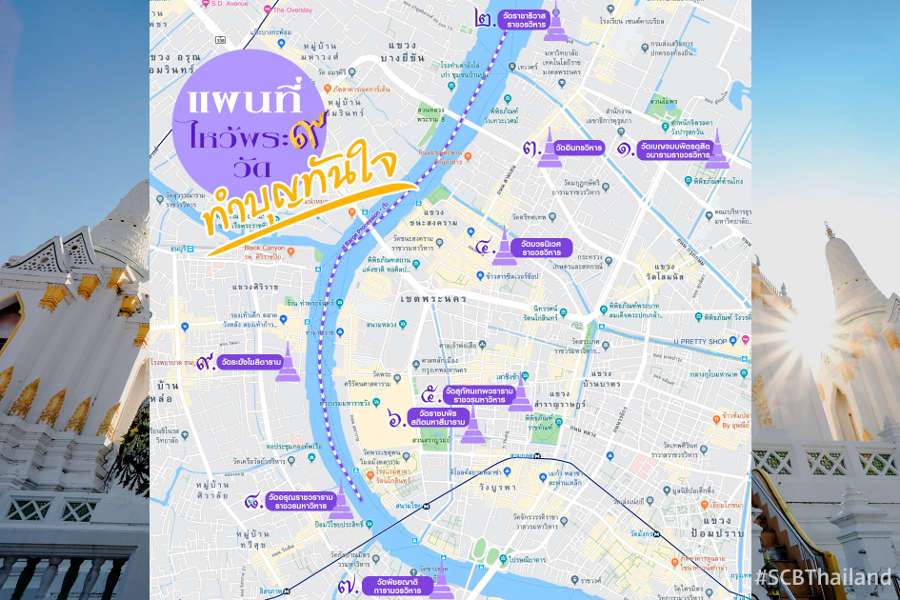 There is no need for tiresome plans. More importantly, all the temples in this trip allow you to make donations easily without having to carry cash with “Tamboon Tanjai” through the scanning of QR Code via SCB EASY App, and making merit is just at the tip of your finger. We shall now introduce you to the trip and tricks in detail of where you should go for merit-making. Without further ado, let us explore!

Ubosot of the ordination hall of the temple was built during the reign of King Rama V with Prince Narisara Nuvativongse as a designer and Phraya Ratcha Songkram (Kon Hongsakul) as the contractor. The ubosot was considered a building with an elegant ancient architecture and the temple was praised as one of the temples with the best design. Also, it was decorated with the best marble from Italy and is known widely among foreign visitors under the name of “Marble Temple”. 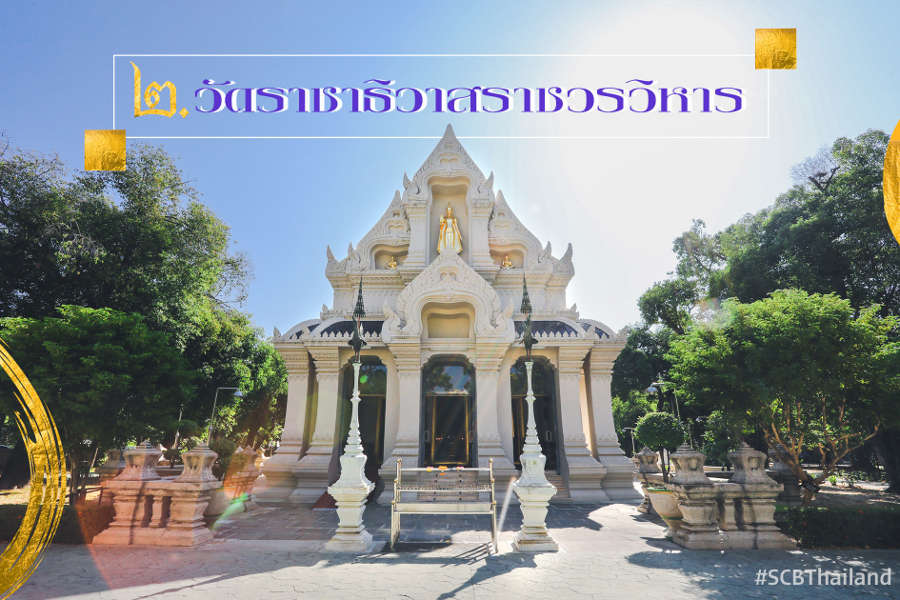 Let us go on to the next temple. If we drive down to Samsen Road, Wat Rajathiwas Rajaworavihara will appear insight. It is one of the oldest temples that was reconstructed under the order of many Kings from the Chakri Dynasty during their reign. It is the temple with importance in Buddhist history in Thailand and is related to Kings of the Chakri Dynasty all along. It holds a post of second-class Royal Temple and is the Dhammayutika sect, Royal Temple. It was built in 1820 and formerly named Wat Samurai. It was an ancient temple since the Ayutthaya period. During the reign of King Mongkut Rama IV, His Majesty gave the temple a new name of “Wat Rajathiwas” which means a temple where the King resides. The reason being that this temple was where King Buddha Loetlanaphalai and HRH Maha Senanurak were ordained as monks and where King Mongkut resided when he was ordained as a monk as well. During HM King Mongkut’s ordination in this temple, he elected Dhammayutika sect monks according to his intention to restore Buddhism in Siam and corrected practices and rituals to go according to the scriptures. Up till now, the election of monks still continues on in parallel with Thai society. 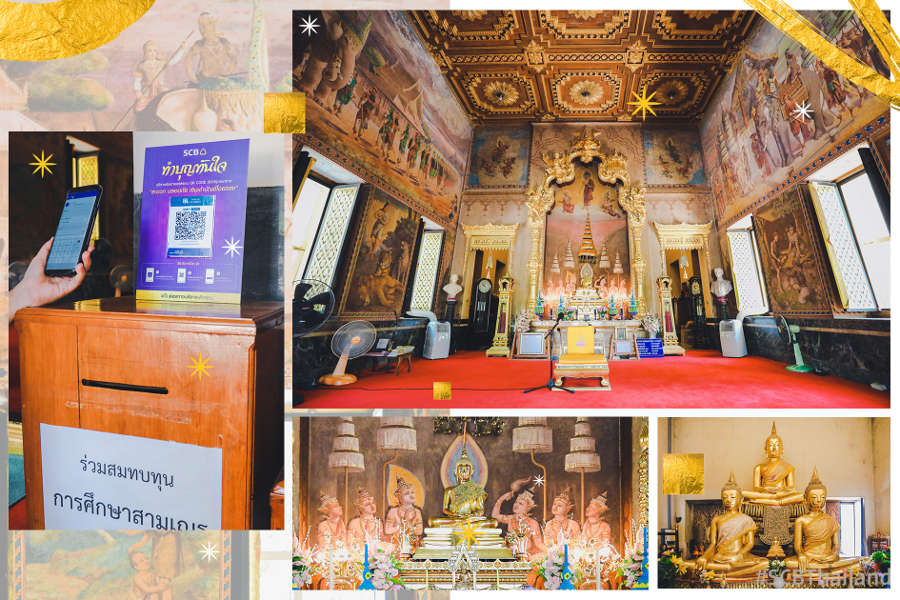 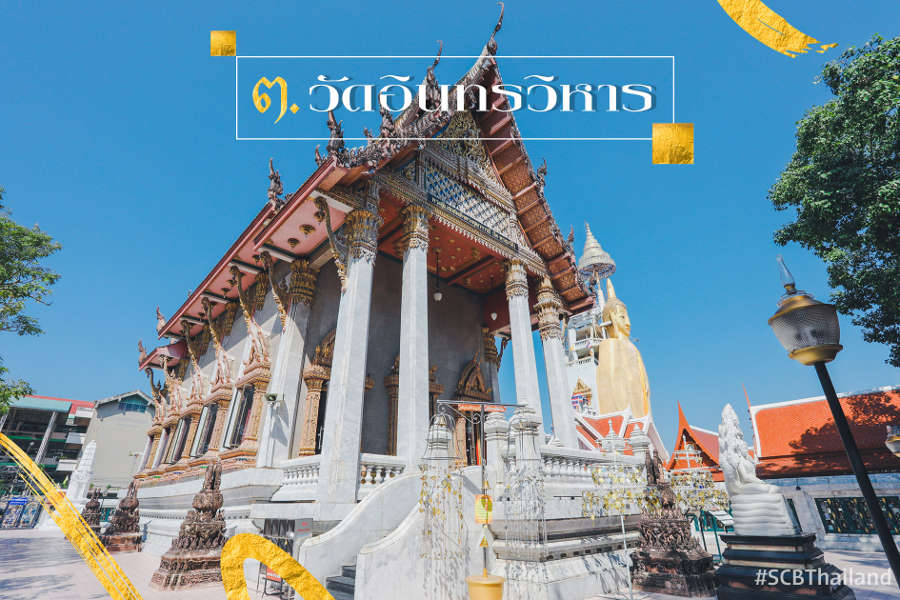 The next temple is located opposite to Bank of Thailand along Wisut Kasat Road near Bangkhunphrom intersection. Wat Indravihan existed before the Rattanakosin period. Its original title was Wat Bangkhunphrom Nok. The important construction happened during the reign of King Rama I as His Majesty bestowed a piece of land in the Bangkhunphrom area to the Vientiane prisoners-of-war. Chao Indra, an uncle of Chao Noi Khiew Khom, the Royal Consort of King Rama I, constructed the temple and bestowed the temple under the care of Chao Khun Phra Aranyik, a monk from Vientiane, who became an abbot of the temple. Later on, there was another renovation by Chao Indrawong, son of HRH Phra Boworn Rajchao Mahasakdipholasep. Chao Khun Phra Aranyik was an expert in meditation and was a teacher of Somdej Phra Buddhacharn (To) of Wat Rakhangkhositaram, who initiated the construction of Luang Pho To, a gigantic standing Buddha statue. However, they were able to build the statue as high as the navel when Somdej Phra Buddhacharn (To) passed away. After that, during the reign of King Rama VI, His Majesty ordered the name of the temple to be changed into Wat Indravihan as he deemed that the previous name was similar to Wat Intharam (Wat Bangyirua Tai) in Thonburi. The construction of Luang Pho To went on with faith. It took a total of 60 years to complete in the reign of King Rama VII. 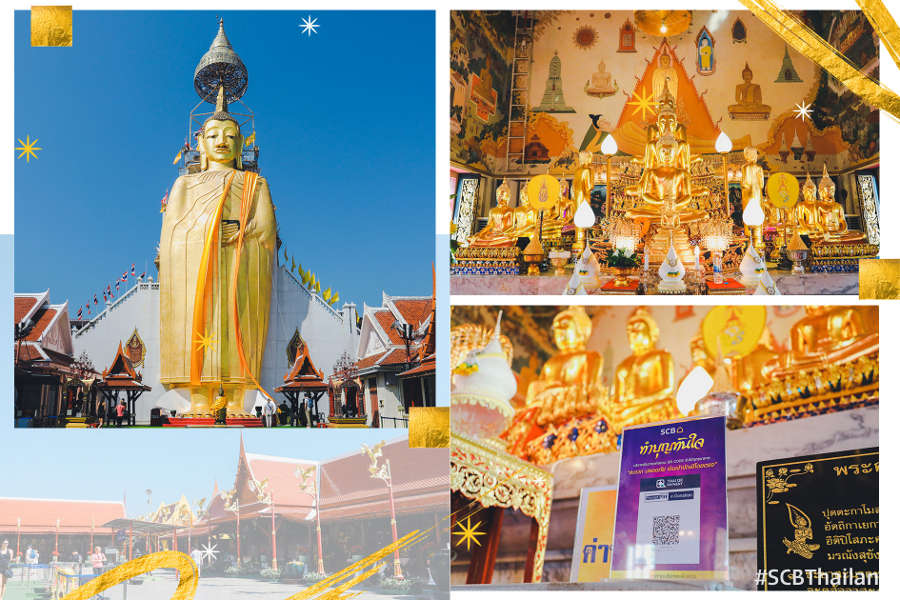 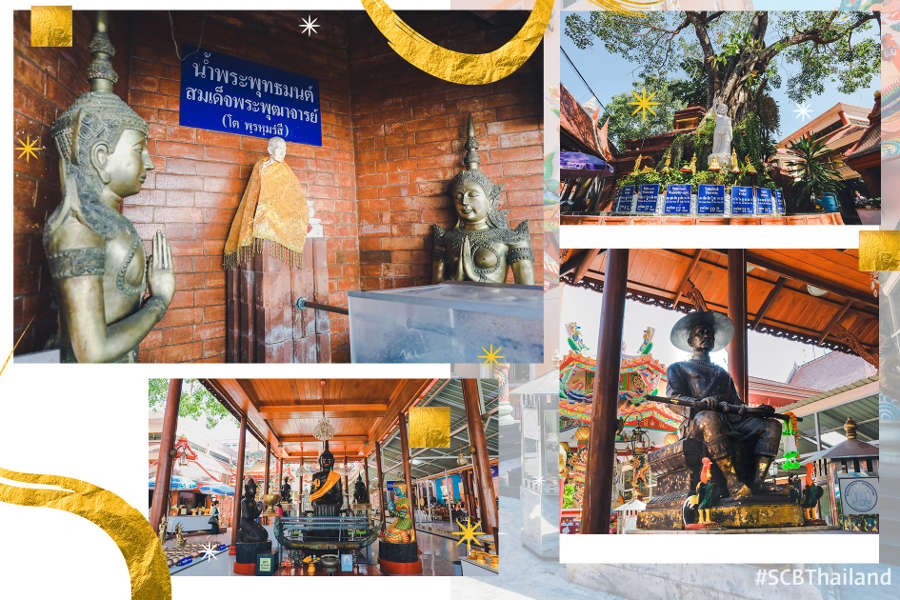 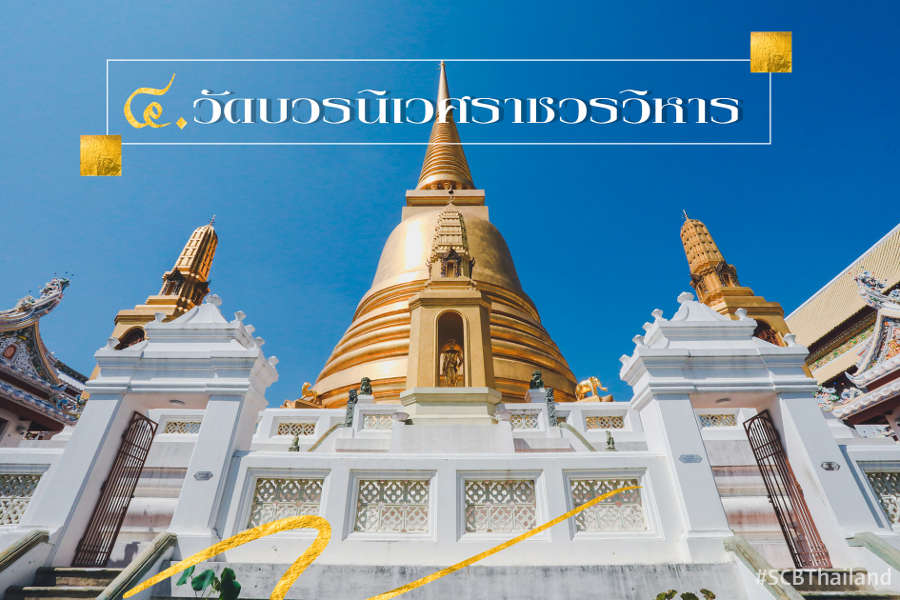 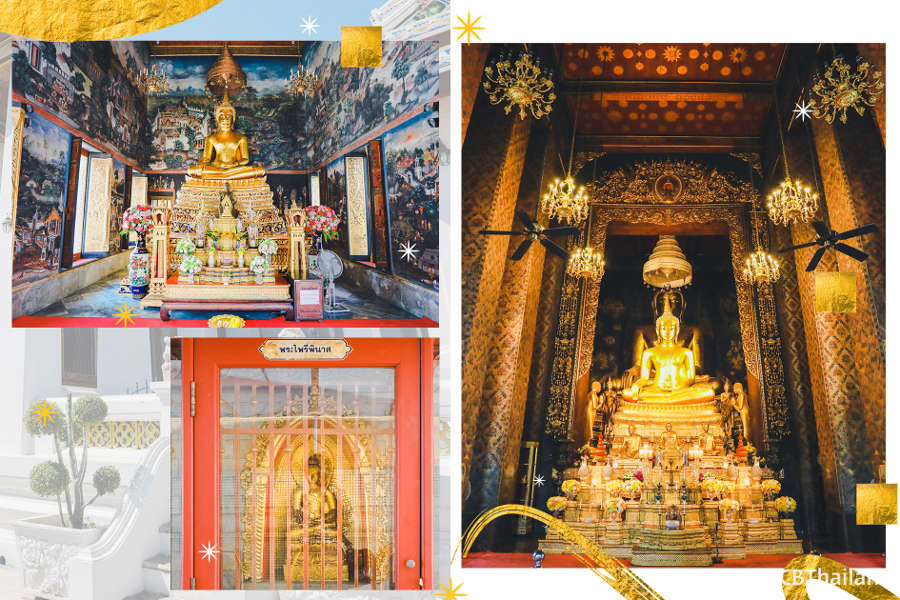 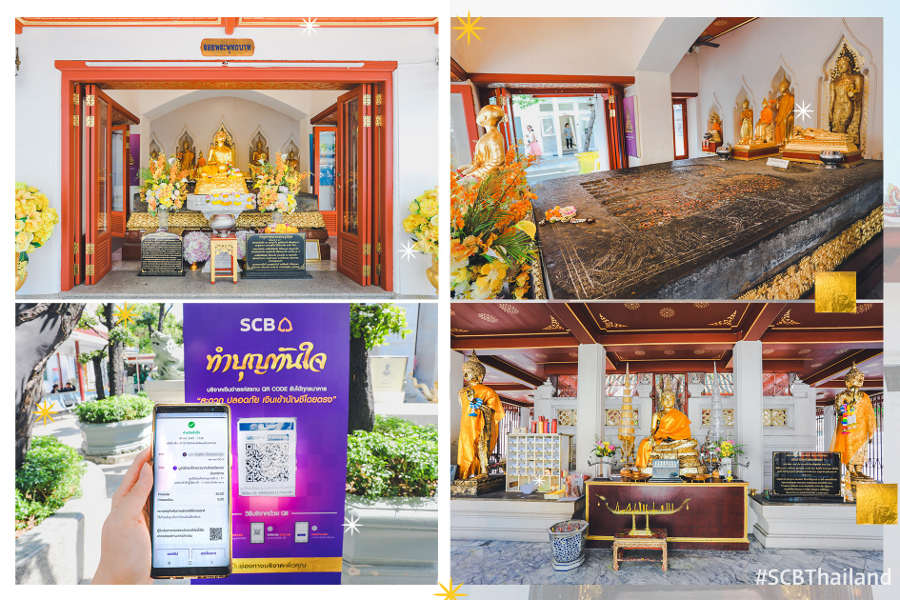 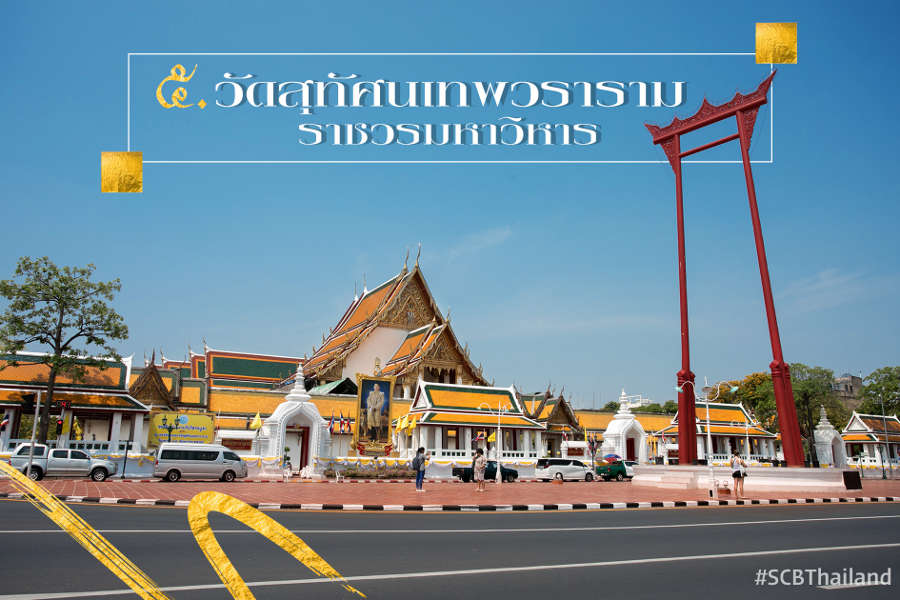 Let us move on to the 5th temple. Not very far by car from The Giant Swing is where Wat Suthat situated. It is the first-class Royal Temple that was constructed under the order of King Buddha Yodfa Chulaloke the Great Rama I (around 1807-1808). Originally, the temple was given the name of “Wat Mahasuthawat” but, at that time, only the base was built. Later on, during the reign of King Buddha Loetlanaphalai Rama II, His Majesty passed the order to continue the construction of the temple by hand-made the main gate of the vihara with Prince Jitrphakdi (nowadays, this gate is being kept in the museum). However, the reign was ended before the construction of the temple was completed. During the reign of King Nangklao Rama III, His Majesty allowed the continuation of construction until the vihara was completed and passed an order for the ordination hall, meeting hall, Sattamahasathan as well as the parsonage to be built and bestowed the name of Wat Suthat Thepwararam Ratchaworamahawihan to the temple with the monks taking residence there since then. Later on in the reign of King Rama IV and V, Phra Vihara Phra Si Sakyamuni and the ordination hall were further repaired. This is considered the temple of King Anada Rama VIII. 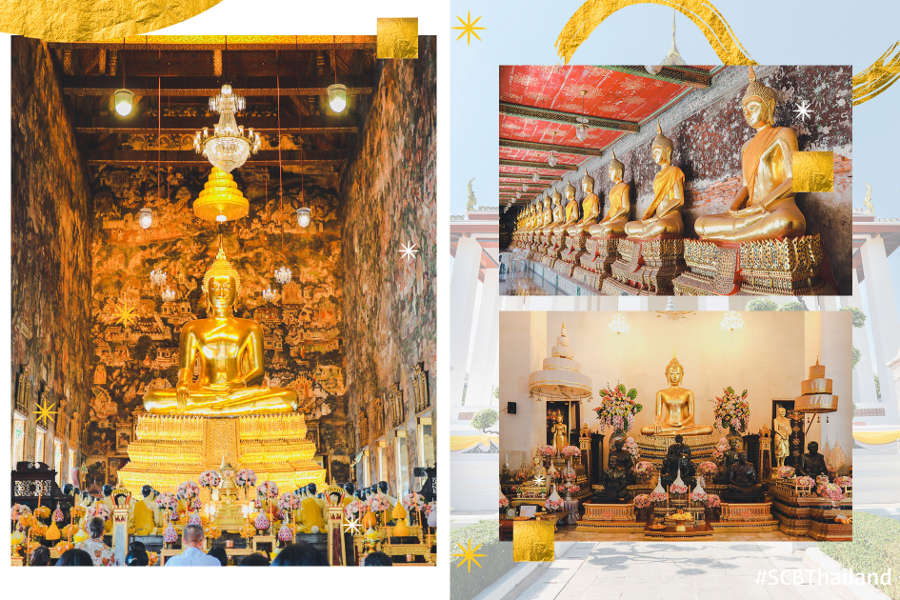 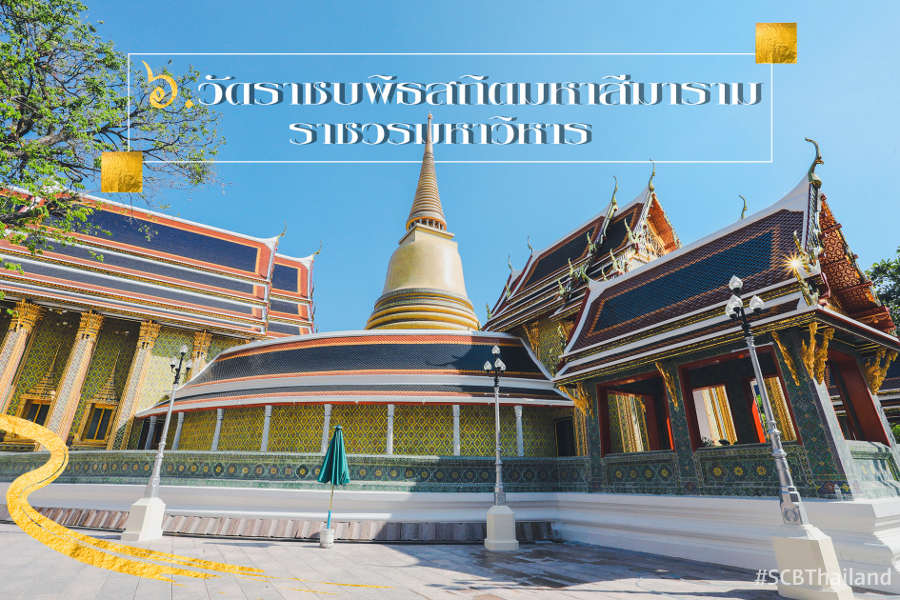 Here comes the 6th temple. Along the Fuang Nakhon Road in the Bamrung Muang area is where Wat Ratchabophit Sathitmahasimaram Ratchaworawihan, the first-class Royal Temple, is located. King Mongkut had ordered it to be constructed as the temple of his reign in 1869. The temple features a mixture of Thai and Western architectures in which the exterior was built in the Thai architectural style and decorated in Western-style for the interior. His Majesty King Rama IV also gave the name Wat Ratchabophit Mahasimaram which means the temple that was built by the king to this temple. Moreover, there are 8 stone pillars with a tip carved in Dhammajak shape as indications in all 8 directions.

The importance of Wat Ratchabophit Mahasimaram, apart from being the last Royal Temple that was built by the king according to the tradition of constructing the temple of the reign, it was where Somdet Phra Ariyavongsagatanana, the Buddhist supreme patriarch, resided. 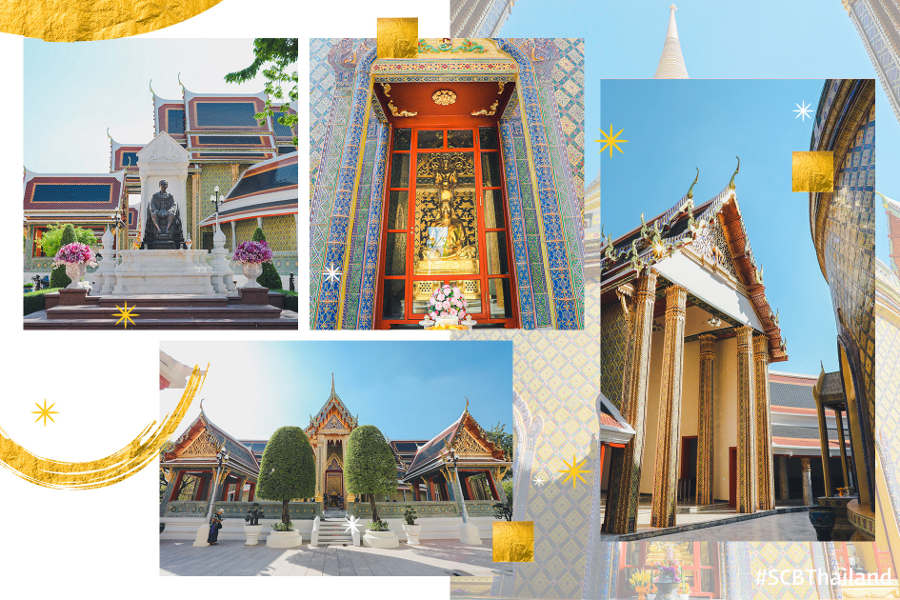 Now, let us cross over to the Thonburi side and make merit at the 7th temple. Wat Phitchaya Yatikaram is considered a second-class Royal Temple. Originally, it was an abandoned temple. Later on, Somdet Chao Phraya Borom Maha Phichaiyat (That Bunnag) that people casually called Somdej Chao Phraya Ong Noi restored this temple during the reign of King Rama III. The architecture of the temple is a mixture of Thai and Chinese style that was popular at that time. The main feature is the Chinese-style roof without the gable apex. Both gables are featured with colorful dragon sculptures decorated with tiles. The ceiling along the corridor was painted with colorful flower painting. The pillars supporting the roof are made of stone in a cylindrical shape and the base is a story of The Three Kingdoms carved on stones. As Somdej Chao Phraya Ong Noi, at that time, was the chief of the trade who had trading brigs with China. So, he brought the ship’s ballast, colored tiles, and stones from China to decorate the temple. When the temple was completely restored, he offered the temple to King Rama III and the temple was called “Wat Phrayatikaram”. Later in the reign of King Mongkut, the name of the temple had changed into “Wat Phitchaya Yatikaram” or what laypeople called “Wat Phitchayat”. 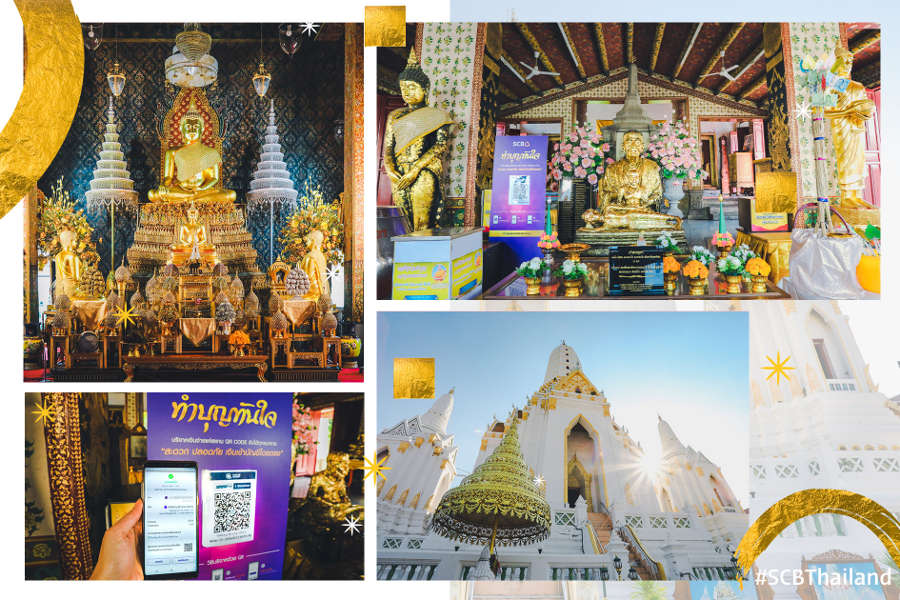 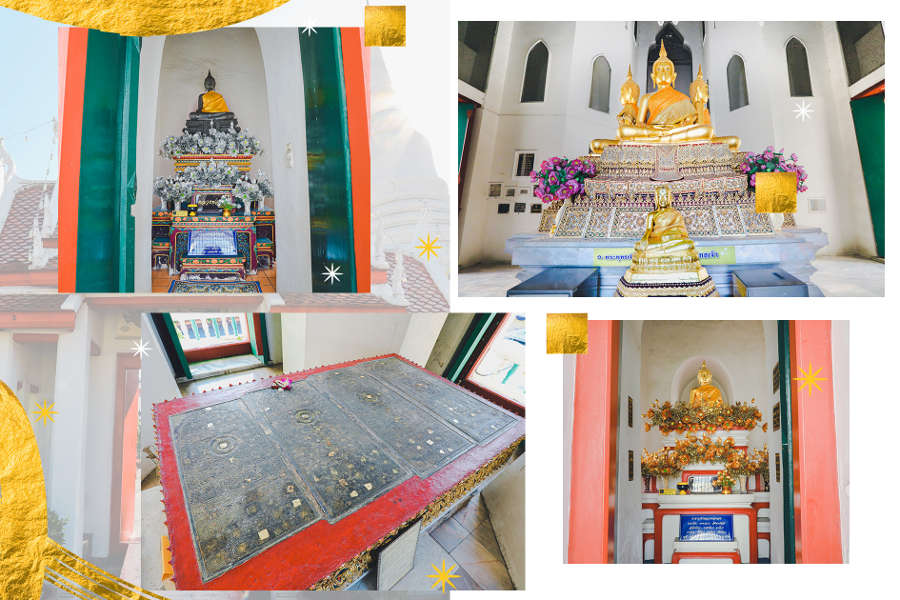 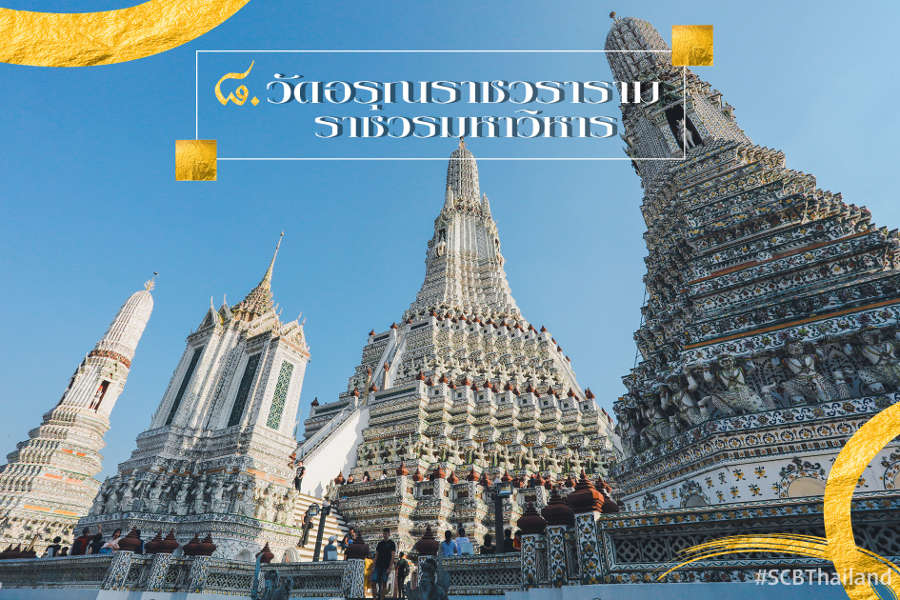 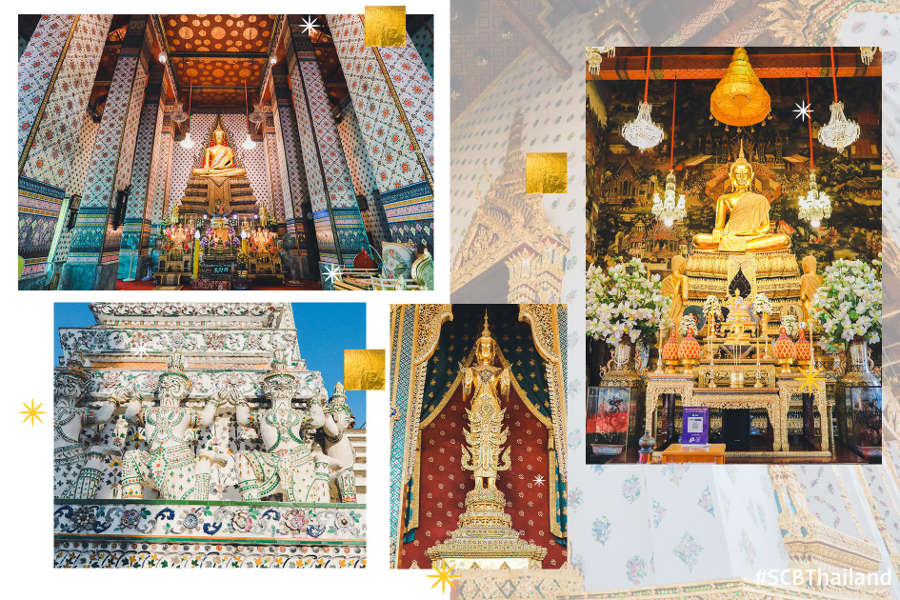 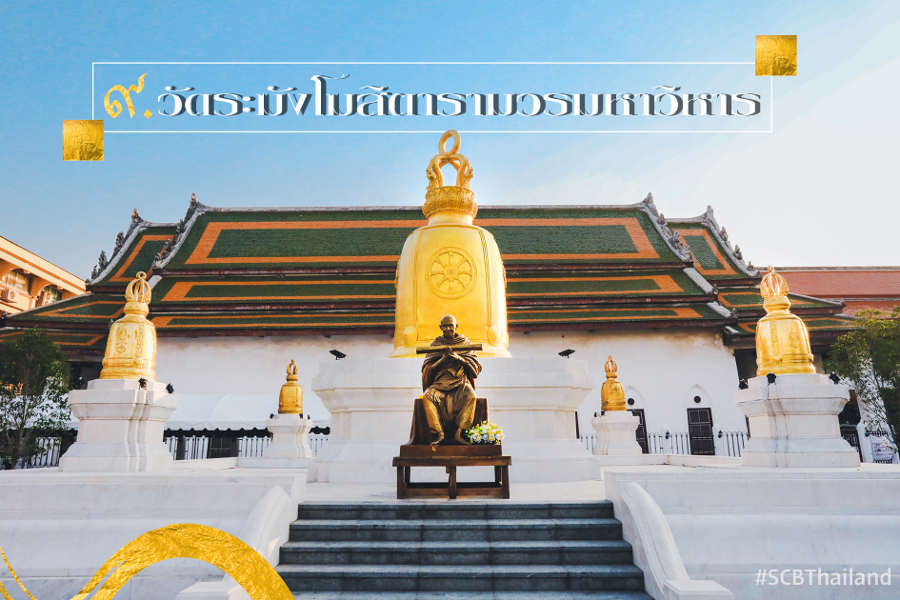 Last but not the least, Wat Rakhangkhositaram is the 9th temple that is located along the Chao Phraya River. Formerly, the temple was known as Wat Bangwayai. It is an ancient temple constructed during the Ayutthaya period. In the Thonburi period, King Taksin the Great had his palace built near Wat Bangwayai and passed the order to restore the temple and make this temple the Royal Temple as well as a residence of the Buddhist supreme patriarch. Later on, during the Rattanakosin period, Wat Bangwayai was under the care of HRH Princess Sudawadee (Sa), an older sister of King Buddha Yodfa Chulaloke the Great. Her palace was near the temple and together with King Rama I, they restored the temple. One bell was found buried within the temple and HM King Rama I had the bell to be moved to Wat Phra Si Rattana Satsadaram and made 5 bells to Wat Bangwayai in exchange. After that, His Majesty bestowed the name “Wat Rakhangkhositaram” to the temple.

Besides, Wat Rakhang has a Tripitaka hall which has extremely beautiful architecture. It was formerly a room of King Buddha Yodfa Chulaloke the Great when he was an officer during the Thonburi period and was given to the temple when he ascended to the throne. His intention was to renovate it to be the most beautiful Tripitaka hall. 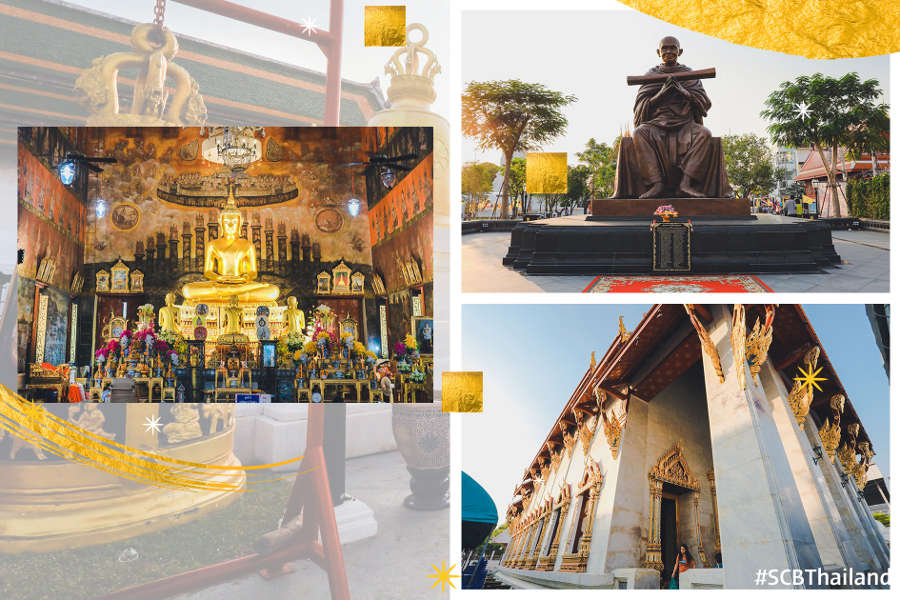 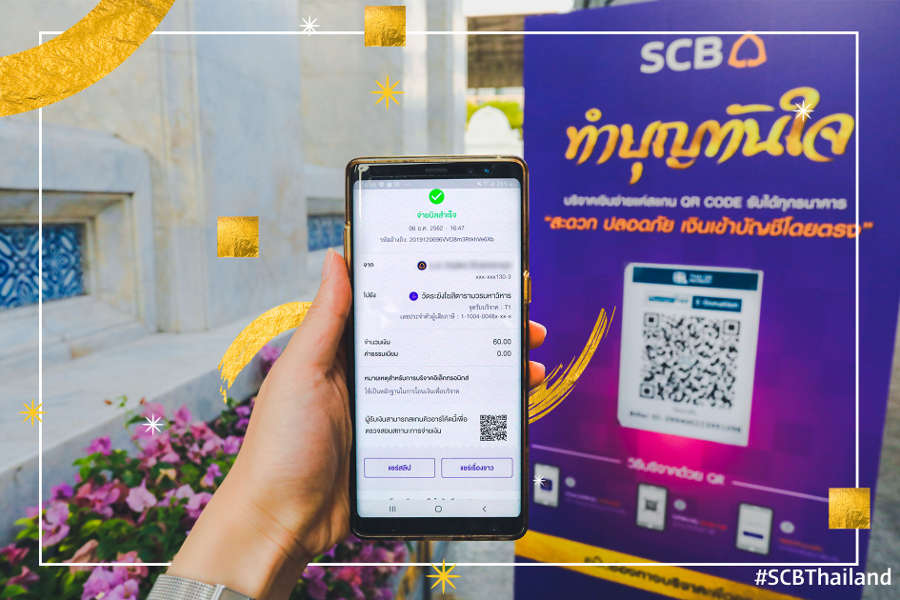 After visiting 9 temples for New Year to have a prosperous life, let us make E-donation maintain Buddhism and support religious activities via SCB EASY App. The process is as followed:

>> Scan QR Code to make a quick donation near the donation box.

>> Press ‘Accept’ to allow the bank to enclose the information to the Revenue Department and/or donation department for tax reduction.

>> Put in the donation amount and press confirm. The money will be transferred directly to the temple’s account.