Why? We must know GDP

Why? We must know GDP

If we listen or read the economic news, we may have heard of 'GDP'.
Have you ever doubted whether GDP is important? And why do we have to know about GDP? This article has answer.

Gross Domestic Product is the market value of the final goods and services produced in the country at a time. Irrespective of whether the output is produced by internal or external resources. Invented by Russian economist Simon Kuznets. Gross domestic product can be used as an indicator of the standard of living of the population in that country. The formula for calculating GDP is as follows.

C or Consumption is the consumption value of the private sector and the public (Private Consumption). This includes almost all personal expenses such as food, medicine, rent, medicine and the cost of a new car. Excluding second-hand car value and do not include the purchase of new housing.

I or Investment is the value of private investment in capital goods, such as new mining construction, purchasing software, purchasing plant equipment. Household spending to buy a new home included in the investment as well. But buying financial products, such as the purchase of shares or debentures, is not an investment but a savings. It is not included in GDP because it is just a legal document replacement. The money is not converted into goods or services; therefore, it is not part of the real economy. It is just a transfer payment.

G or Government Spending is the total cost of government to purchase the final goods and services. This includes the salaries of government officials, the purchase of military weapons, and the state investment costs. But do not include transfers such as social benefits or unemployment benefits.

X or Export is export value

M or import is import value

GDP is important to the economy, that is, in the economy, there must be a turnover of income and expenditure of the household sector, the government sector both domestically and internationally. That means that people have jobs, have money to spend to buy goods and services and pay taxes to the government. And if there is money left. (That is, savings), it can be used to save money in a financial institution or invest in a business or investment in stocks and mutual funds. 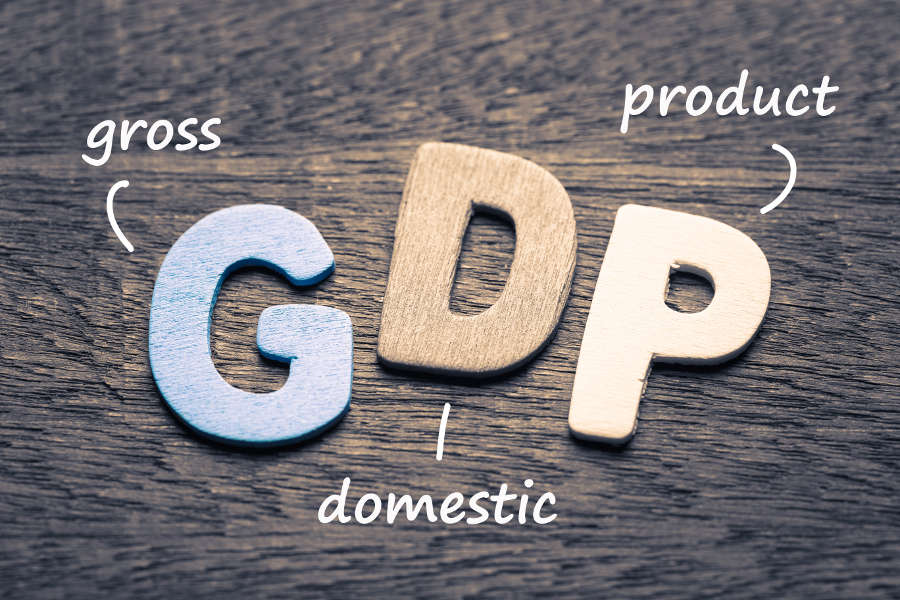 Businesses will also earn revenue from the sale of goods and services. By investment (loans) from financial institutions to produce goods and services, pay interest, pay for labor cost, and pay income tax, VAT to government.

The government will have tax revenues and will use tax revenues to build utilities.
To support the business sector to be able to conduct business. And support the household sector to spend and save money properly and is measured. "Gross national product" or GDP itself.

If GDP is positive, the overall economy is growing from the previous year.
People are spending more; the public and private sectors have increased investment and export value is higher than imports. Which is a good sign. For example, the GDP estimate for 2018 is 4.4%, which means that the overall economy in 2018 is up from 4.4%

On the other hand, if GDP is negative, it indicates that the economic situation in the country is slowed down or not in line with the central bank's projections. It is possible that employment may be lower than expected, reduced investment, government spending is less than expected and even the consumption of the people is reduced. Negative GDP will cause investors to move their money into the market or country that has better stable and growing economy.

GDP is the index of gross national product. It can be said that the growth of the domestic economy each year has grown or reduced. But it cannot measure true quality of life because sometimes the product or service will be sold may come from our poor quality of life or negative impact on society and the environment. For example, the consumption of excess debt causes high household debt or accelerate business expansion to neglect the impact on the community and the environment. Efforts are being made to use other measures to measure social and environmental progress, such as the Human Development Index (HDI) by the United Nations. Happy Planet Index by New Economics Foundation. While some countries have chosen to develop their own indicators, such as the Gross National Happiness (GNH) of Bhutan, And the Wellbeing Index (Australian Unity).

However, when GDP is measured for economic prosperity, so it is also important for investors and fund flows. Because investors, whether small or large will choose to invest in a country with a better economy, more stable and growing.
So, GDP is still one of the key indicators that investors should consider before investing and it's not thing that far from us anymore.