Cancer just came to say hello. Stumble, but not fall

Cancer just came to say hello. Stumble, but not fall

It has been a fully-4-years since K.Tarn-Natcha Pongpuripat, the Facebook page owner of “Chan Mai Wang (I am too busy)” had said goodbye to this fatal disease ‘Lymphoma’ that got rid of her happiness, made her life tripped and almost fell.

As someone used to say… when it comes to fatal disease, there is no alarm.

She had no weird symptoms at all. One day morning, while she was taking a shower, she found around and a solid lump on her neck. She decided to consult with her doctor friend. At that time, she thought that it might be only tonsillitis and it would be gone after taking some medicines. But it was not what she thought. It took a while to find the reason and she had to be in and out of the hospital for 4-5 months. This was her torturing time because she had no idea what she was sick of. She tried every way whether to collect and check the cell but could not find the root cause. The hospital suggested her to do the whole lump operation, but the problem was the medical fee was too high which was more than a hundred-thousand Baht. This made her hesitate to continue her medication.

We spent a lot of money to find the disease root cause in these past months. We had lost faith and it was too hard to accept'' K. Tarn said. Because of her hesitation, she decided to find another hospital. And because of this change, it made her found what this lump was. K. Tarn had an ultrasound and took many needle biopsies to increase a chance to differentiate this lump.

After 7 days, she had an appointment with the doctors for a result...


"I was so relaxed at that time, before that I was in Korea with my friends!”

However, she had saved some room for disappointment in case anything happens. It may be a Lymph node inflammation or Lymph node tuberculosis or the worst which is Lymphoma. And the day had come when the doctor said that “You are at a Lymphoma, phase III

K. Tarn was 31 years old when she found that she had cancer. At that time, she was at one of a good life period because she owns many businesses whether pets grooming and hotel, and a collagen brand owner. She had a time with herself because she was not an employee. Also, she had a pocket money, own a house and a car. She was confident with herself, her working-life and her money.

At that time, she loved to travel and because her life was at that certain point, she started to travel whether domestic and international. However, she was not paying enough attention to her health whether late-sleeping, late-waking up, no exercise, eating whatever she wants and did not care that it is good or bad. She ate everything she wants including grilled and junk food which are her favorite foods

"Do I really have cancer?"

The first moment that she knew she had cancer at stage 3, she did not cry as we may have seen in most TV dramas. She was confused, stress and did not know what to do next. Although she might say that she was a positive thinking person and tried to not to be a drama about this sickness, she could not resist her fear because she is the main person for her family.

" I could not refuse but to accept the fact and start curing myself."

She began her recovery with a full body CT scanning and lumbar puncture. This Lymphoma, stage 3 was not raised to the spine yet, so the doctor planned her recovery with chemotherapy twice a month for 8 months (every 15 days). It was a one day therapy and no need to stay at the hospital.

Her first chemotherapy made her mind and her body really bad because she could not help herself.

"My entire body was hurt; my bone was also hurt. It was hurt so badly that I had to use another hand to pick up one hand. The first chemotherapy made me feel failed, start to cry and keep asking myself repeatedly, why me?"

However, it was a miracle or coincidence, her Darby and D-Day, 2 chihuahua dogs snuggled her while she was crying. This change her thought and she could not die right now, she had to fight for staying with her dogs for a longer time.

K.Tarn told us about her facing-with-cancer-sadness life that whenever she woke up, she found her hair was falling. She did not want to wash or comb her hair at all because it will fall over the floor. Sometimes she smelled the food and that made her feel nauseous. She wanted to sleep all the time. At the first few weeks, she kept telling herself that she was a sick person and that made her feel worse and did not enjoy anything in her life. Her mind had changed to be a more negative person.

One day, her mom could not resist and told her something to change her attitude which was

“If you want to get well, you have to take care of yourself!” 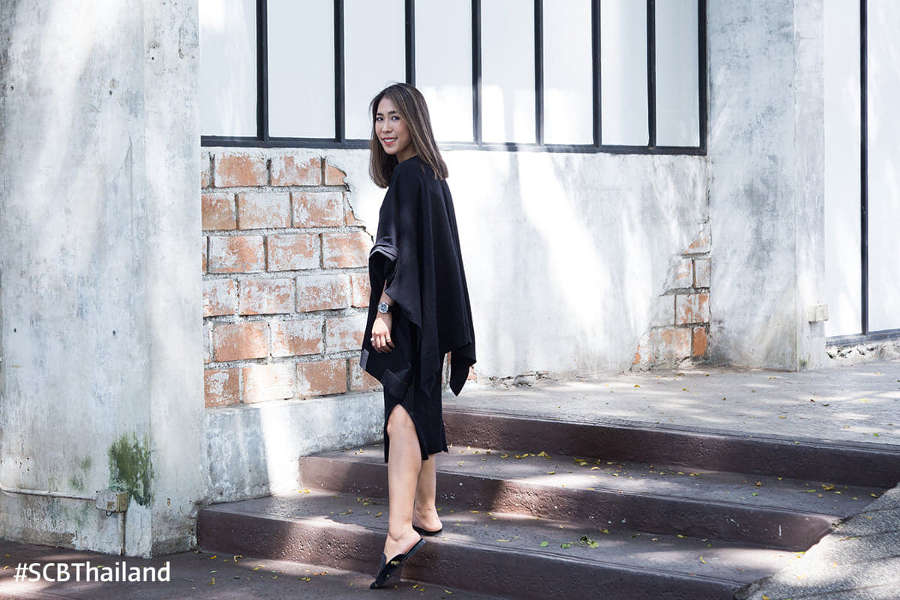 The method to win cancer is not that hard or complicated. Addition from medical treatment, mindset is also important. We have to change our mindset to feel good at ourselves and to love ourselves. K.Tarn told us to start looking from everything around herself at a positive side and worthy such as


"Today, I could wake up, take a shower and brush my teeth by myself. How lucky I am!"

"Today, I threw out just 3 times. It is better than yesterday which was 5 times. Let's hope that tomorrow, it will be only 2 times.”

"My hair has fallen a lot, but I can wear a wig and I could change my hairstyle anytime.”

Although many people may think that these are just some small things but for her, it was a very great medicine that every patient could have and tell themselves. Moreover, from dealing with her mind was how to handle surrounding persons.

"The day I knew, I had cancer was not the hardest thing in life as how to tell dad and mom that I had cancer." K.Tarn told us while laughing at the same time.

Certainly, that family is the main important thing in her life. She has neither brother nor sister. She is an only-one-daughter in the family which made her sickness much more significantly. So, she has to keep the feeling between her and her parents and made them feel "cancer is ok. It can be cured. We will fight it together." Along recovering period, she was patient, she did not blame anyone and keep having medical treatment as the doctor said. Although the body had low energy, the heart was full of happiness and enjoyment. Whenever her parents saw that she was strong, they would have hope and smile on their faces.

How to deal with load of expense?

"Cancer did not just consume our body, it took lots of money from us"


However, K.Tarn felt she was lucky that cancer came while she was not struggling with her life. She already had some money, a car, and home but it could not avoid that sickness takes a lot of money. She told us that it was almost a million for her recovery.

Another bad news was a year before she found cancer, her best friend had suggested her to do the critical insurance, but she did not do it.

At that time, she was arguing with her friend that cancer is not the easy disease that anyone can have. Her working life was in a fun period and she thought she was strong and had no risk at all. Also, her penny-wise-and-pound-foolish habit made her decision not to buy critical disease coverage insurance.

“At that time insurance premium was not that high. If I had done it, at least I would have some saving money left, not feeling empty like this.” K.Tarn said.

Although she was so blue for losing her money, she did not want to die with her sickness. She wanted to live a life and do many things as she has ever dreamt of and also rebuild everything she ever had piece by piece.

What did cancer tell you?

Today K.Tarn has already been healthy and become a healthier person because cancer taught her that every minute worth a value.

“Maybe it was good that I had cancer (laughing) because it taught me how to live my life from now on.”


From the girl who thought that she could control herself, live her life to the fullest and never look for any important or wanted things. Cancer made her set the new target in life. Her previous goal was to be rich as 10 million, but she found that money won't bring her happiness but staying healthy is.


“Cancer told me to live a conscious life and know what is our today target.”

She was once an extravagant person because of her well-going business which made her obsess with luxury brands. Her happiness was once bags, shoes, and high fashion clothing brands. But after her sickness, she decided not to go back to her luxury life but turned into a more casual lifestyle. Another secret to fight with cancer and mind recovery is to let go and have a slow life.

“We never know what will happen in the future. I may be sick again. I cannot live the same life and I have to prepare for whatever I can.” K.Tarn told us.

Because healthy is an important thing.

Health is wealth but it is better if you are sick and can handle it.