Let’s Get Adventurous in Prachin Buri

Let’s Get Adventurous in Prachin Buri

Many might want to change their travelling style to cycling trip to challenge their body fitness and if anyone thought so, they do not have to travel so far. Khao Eeto of Prachin Buri is a suitable cycling route that everybody should try out as it has excellent route and fresh air. After finished cycling, do not just return to Bangkok yet, stay on to discover new wonders in Prachin Buri as it is a city that nobody can get tired of and it requires little time and budget to explore.

Nowadays, people often go to Khao Eeto for cycling, Prachin Buri. It has turned into a community of cyclists with its attractive cycling routes. There are a variety of cycling routes, ranging from normal to down-hill, all with smooth road surfaces. Along both sides of the road stood tall trees, giving shades for cyclists and the route will gradually increase in inclination as it goes.

The starting point is at Khao Eeto Reservoir (also known as Chakraphong Reservoir) and the route is suitable for both fast-paced and slow-paced cyclists. Fast-pace cyclists can challenge themselves by cycling up to the landmark on top of the mountain which is called Sala Kiaow. If any cyclists would like to cycle in a slow-pace, that is totally fine too because there are several viewing points along the route that cyclists can stop by and enjoy the scenery.

For those who are not cyclists, they can still visit Khao Eeto for vacation. The traveling route to Khao Eeto is very smooth and convenient all the way to the mountain top. Visitors can experience the forest ambiance by following the cycling route. On Khao Eeto, there is Khao Hin Son Viewing Point that total city view can be clearly viewed from up there. Not very far from Khao Hin Son Viewing Point, there is Khao Eeto Waterfall. The first and second level waterfall is very safe to swim, so Khao Eeto Waterfall has become a relaxing place for both locals and tourists with restaurants, toilets and camping space available for visitors. 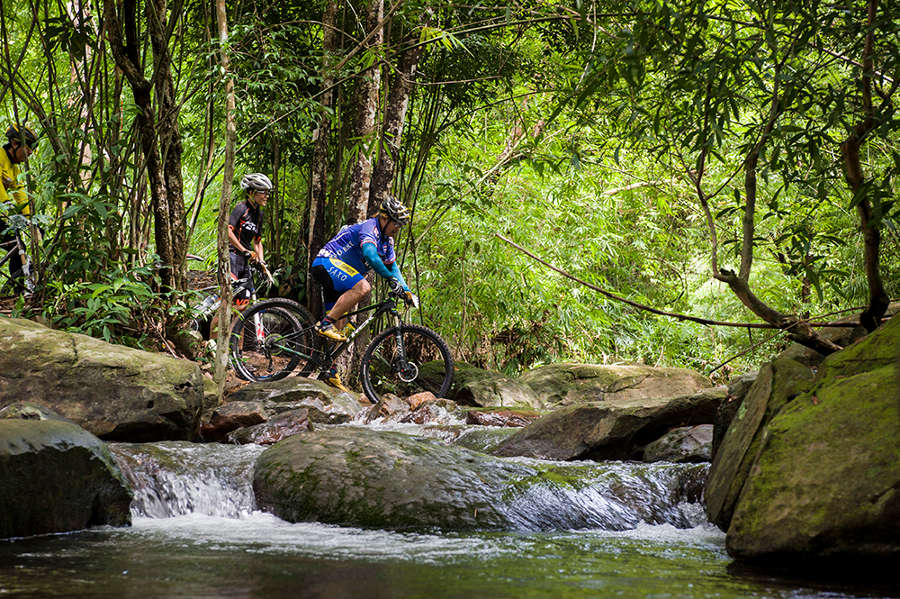 Chao Phraya Abhaibhubejhr Museum is a yellow Baroque building on the riverside of Prachin Buri River. It was constructed under the order of Chao Phraya Abhaibhubejhr (Chum Abhaiyawong) to welcome the visit of King Rama V, but King Rama V had passed away before the construction was completed. Later, this place has always been used to welcome King Rama VI and the Royal Family with the owner had never resided in the building for all his life. After that, it was given to the government and become the property of the Ministry of Public Health. It served as Prachin Buri Hospital and later, was renamed to Chao Phraya Abhaibhubejhr Hospital under Ministry of Public Health. Despite several renovations, the interior of the building remains completely the same as it was in the past that Fine Arts Department has registered this building as a historic site and was also given an award on the best architectural building. 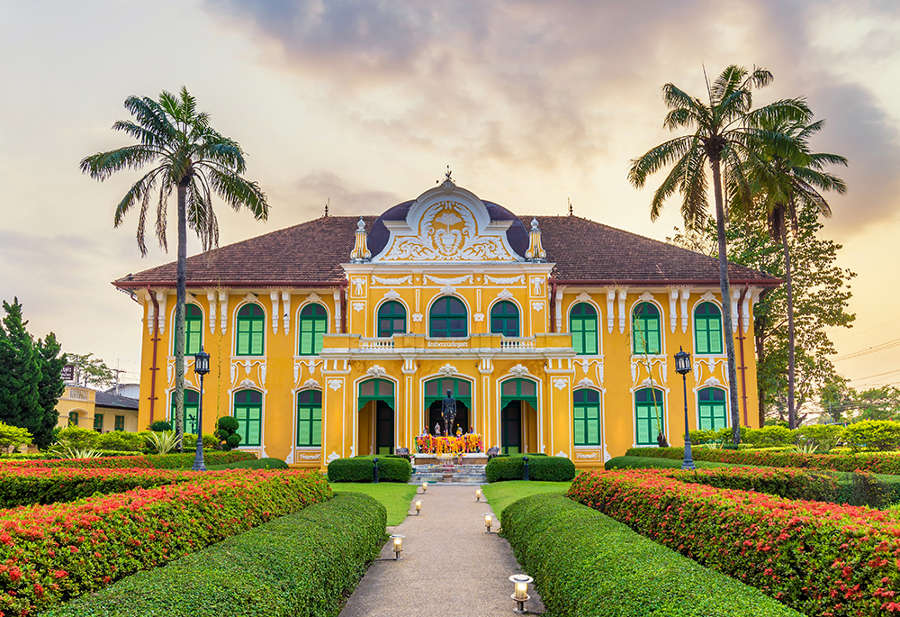 Yoo Suk Suwan Museum or Ta Kiang Museum is a private museum, constructed upon the love and interest in artifacts of the owner. It all started by the owner inheriting and collecting artifacts on his own. Afterward, artifacts that the owner possessed have increased in number that she or he has decided to establish this museum to exhibit and share these artifacts with others to appreciate. Nowadays, this museum has become an educational center and a famous tourist spot of Prachin Buri.

The museum is embraced by nature with a variety of plants and animals such as fish, turtles and colorful birds. The interior of the museum exhibits antiques especially the lanterns. There are more than 10 000 lanterns that are produced from many different countries all over the world such as England, USA, Sweden, Hong Kong, China, Australia, and Thailand. There are 4 exhibition buildings, namely, Rajawadee Building, Leelawadee Building, Chuan Chom Building, and Bhayu Building. Apart from displaying lanterns, each building also exhibits Buddhist talisman, old photographs of Prachin Buri, several antiques including silverware, gold ornaments, old-style iron, potteries, old-style refrigerator, ancient tablewares, carbonated drink bottles, calculators, fans, toys, etc.

Beautiful flowers can be seen in Prachin Buri too. Those flower lovers can visit Dassada Gallery to indulge themselves in the flower garden with an area of 750 rai (1 rai = 1 600 m2). The themes of the garden will constantly change. It displays both flowers that grow in Thailand as well as flowers that grow in cold temperature so that visitors can see the spectacular view and feel refreshing with the cooling weather throughout the year. Visitors can experience the garden closely, take photos as well as enjoy various fun activities that are prepared by Dassada Gallery. The garden is divided into 3 main zones which are the Flower Tunnel, the Miniature Zoo that shows many adorable animals has outdoor activities to enjoy and floating market that the latter 2 are opened only on Saturday and Sunday and, lastly, the Night Garden that displays lights and musical fountain. Apart from that, there are floristry, souvenir shop, restaurants that serve special dishes from flowers, café, flower ice-cream and bakery for tourists of all ages. If anyone is interested in spending a relaxing night among nature, Dassada Gallery also has accommodations available as well.

Thap Lan National Park is the second biggest National Park in Thailand which consists of different sizes of mountains overlap into a large area of Phanom Dong Rak Mountain Range. There are many tourist attractions within the national park such as Khao Ma Kha which is a trekking route with a marvelous view along the whole route and Lum Plai Mass Dam that has many activities like sailing and rafting. Also, there is a beach area that visitors can swim inside and beautiful Bo Thong Waterfall as well as Kept Tawan Cliff that sunset is the most beautiful there.

Moreover, there is a biggest fan palm forest which is also the last fan palm forest in Thailand. Fan palm forest is filled with fan palms which are ancient plants that can be found in a specific area only and the name Thap Lan National Park comes from the fact that the forest is full of fan palms. If anyone visits Thap Lan National Park during the rainy season, they will experience a refreshing air and lush green view of plants. There are also lodges and camping area available within the national park.

Rainy season is suitable for adventurous rafting trip because this is the time that lakes are the most beautiful. Kaeng Hin Phoeng is considered one of the best rafting places in Thailand. It has rafting route with difficulty level of 3-5 with total distance of 4.5 kilometres that adventurers will have to spend about 2 hours in the 8-10 people size raft. The raft will float along the river stream, passing about 6 reeves which are Kaeng Hin Phoeng, Kaeng Wang Bon, Kaeng Luk Suea, Kaeng Wang Sai and Kaeng Ngu Hao with the water level rises to level 5 this year, bringing adventure up to another level.

In July to October each year, Prachin Buri will hold annual rafting competition and for those adventurous souls, this is the suitable period to visit Prachin Buri. After the rainy season has passed, Kaeng Hin Phoeng will turn into the large rocky ground which is very attractive. Apart from that, there are several facilities available in Kaeng Hin Phoeng including parking lots, restaurants, accommodations, toilets, rafts, security tools as well as tour guides that tourists need not worry.

History and ancient civilization are displayed for education here. Si Mahosot Ancient town is a district in Prachin Buri. It is a 1 200-year-old Dvaravati ancient city that was once an important port and the center of civilization in terms of arts, culture, tradition, and Buddhism. In the present, many pieces of evidence of Si Mahosot Ancient Town can be seen in both the interior and exterior of the city. The important historic sites of Si Mahosot Ancient Town consist of 18th-century historic sites which are Devalai made of laterites with the top part made of Phu Khao Thong bricks forming a circular stupa, similar to the upside-down bowl and rectangular Devalai made of laterites. Also, there is Sa Keao which is an ancient pool. The rim of the pool was crafted many different animals up to 45 kinds onto it. Other interesting antiques and historic sites are Phra Nirantarai, Phra Nagaphrok, Phra Sangajjai, Shiva Lingam, Nagaphrok sculpture made of laterites, Lion sculpture made of laterites, Ton Bodhi Temple where the holy and most ancient Sri Maha Bodhi Tree of Thailand is located, Luang Pho Dvaravati which is the ancient and sacred Buddhist statue situated in front of the district office that should not be missed to visit and pay respect. 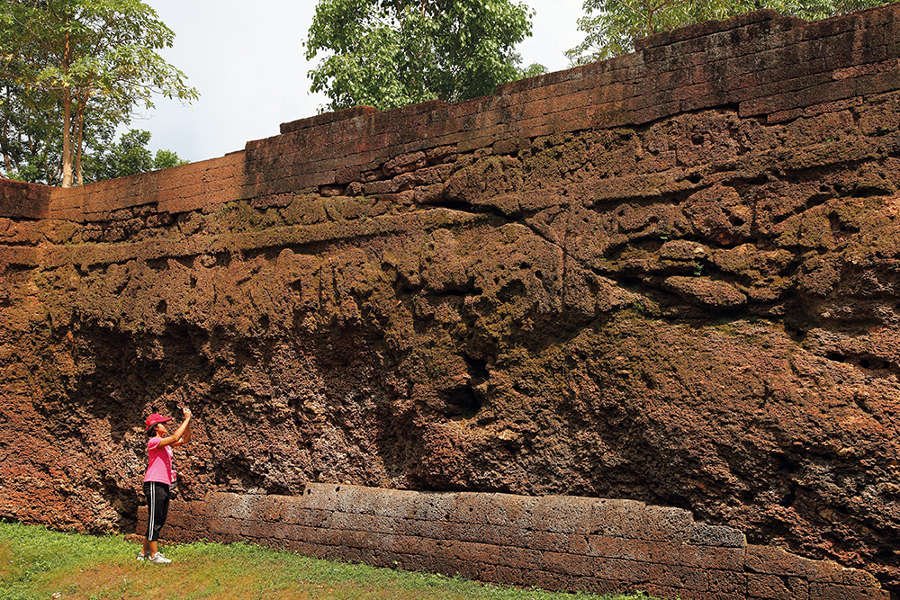 Sa Morakot is a large ancient marsh amidst the greeneries. The surface of the marsh is all covered with many lotuses that if visited in the morning, beautiful blooming lotuses can be seen. Besides, there is an important historical site which is a reproduction of Buddha’s footprints that is said to be discovered in 1986 in the area of Sa Morakot Archaeological Site. It is believed that this pair of footprints is the most ancient Buddha’s footprints in Thailand that were created around 7th-9th century by carving the footprints on natural laterites to make it as close to the original as possible. The Mahayana Buddhist buildings are also constructed according to Arokaya Sala during the reign of Lord Chaiyaworamann VII. The construction replaced the old buildings in the 13th-14th century. So to speak, the construction plan is to have a big pool on the east and before entering the cluster of buildings, there is a small pool. On the right side, there stood the Kopura or the gate with glass wall parapet in the east. On the left side, there is a books and scriptures keeper. The middle part situated the stupa that most of the time displays Bhaisatchakuruwaithurayaphrapa Bodhisattava, the Healer. In the past, Sa Morakot was more complete than in the present, being blind to the situation, there were several movements of laterites to build ubosot in the nearby areas. 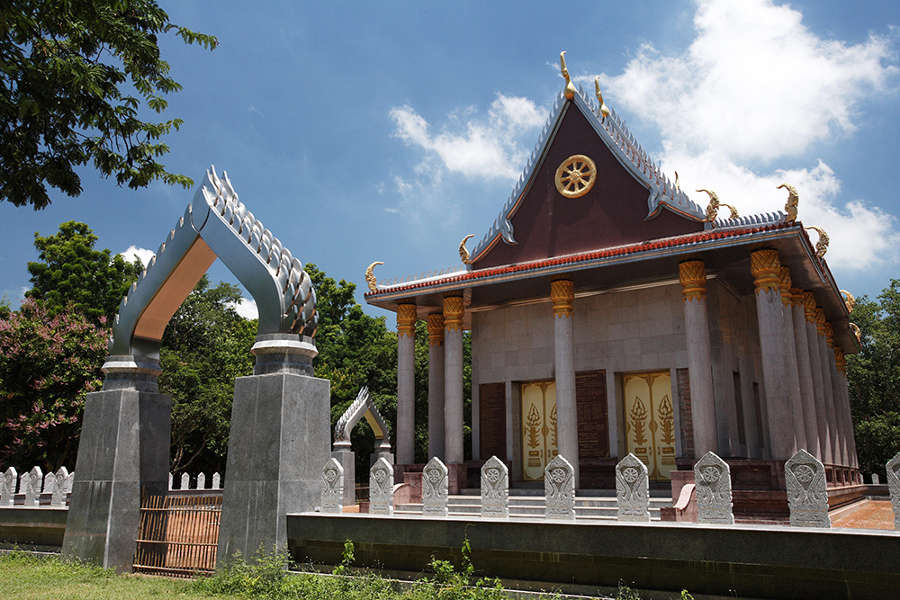 Kaeo Phichit Temple is situated on the right side of Bang Pakong River. It is considered to be an ancient temple of the city. It was constructed in 1879 by Pramul Phoka, a millionaire of Prachin Buri and a wife of Nobleman Pramulphakdi. Later, Chao Phraya Abhaibhubejhr constructed the new ubosot, displaying the principal Buddha statue with the forgiving posture. Thus, the architectural style and pattern decorating the building are the mixtures of Thai, Chinese, European and Khmer arts. The interesting spots in the temple are the exterior wall of the ubosot that the wall was sculpted, telling a famous epic, Ramakian and the interior of the ubosot displays paintings on sheets of cloth, depicting Buddhist tales such as Jataka and Encounter of Evils which were painted by the royal artist of King Rama VI. Moreover, there is a Tripitaka Tower within the temple and in front of the ubosot is the Thai study building and also, the museum exhibiting antiques. 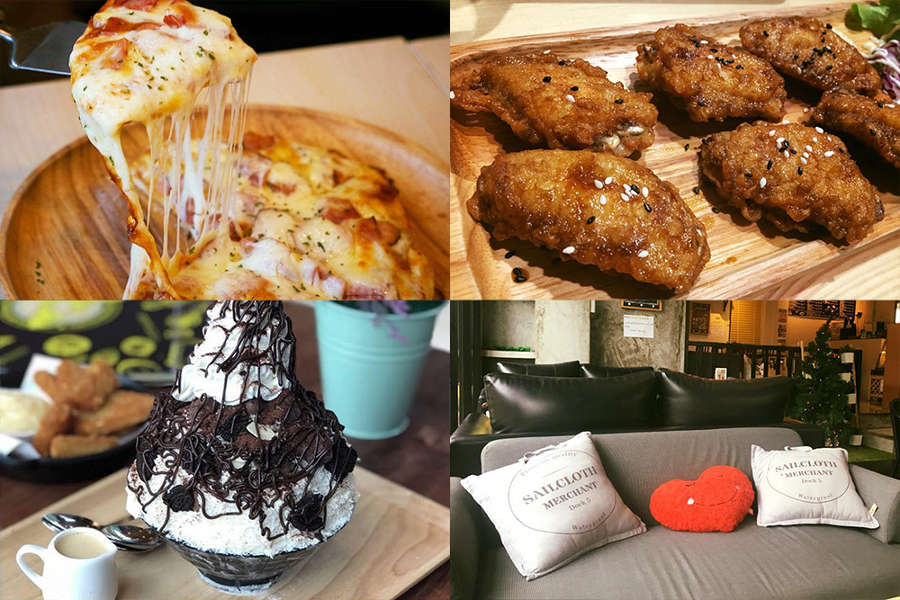