Nong Khai is a small and peaceful town worth of staying and visiting. Once, this town which borders the Mekong River and Laos, was ranked as the 7th most livable town in the world. Those who had visited Nong Khai all said that happiness and beauty at this town can be easily found. During this time, Nong Khai has a tradition to celebrate the Buddhist Lent called the Naga Fireball, which is worth for visiting.

The charm of the Mekong River has been very widespread. If you have a chance to visit Nong Khai, don’t miss the beautiful scenario of this atmosphere, especially during the evening where you can see the Buddha’s relics in the middle of the river. Moreover, it is also an area of fisheries, agriculture, food stores, fitness center, and recreational facilities. During the dry season, the water is reduced to the beach level along the Mekong River, which is about 200 meters long, where you can have fun and play with.

The beach is located under the Thai-Lao Friendship Bridge, which is a bridge over the Mekong River, linking the two countries’ first friendship. It connects Nong Khai Province and the city of Nongkai in Thailand with Vientien Prefecture in Laos. If anyone wants to cross the border to Laos, just carry a passport or identification card to make a transit card. In addition, if anyone wants to take a walk on the bridge, there is a pathway for you to view the beautiful scenario. The bridge is open daily from 5 a.m. to 8 p.m. 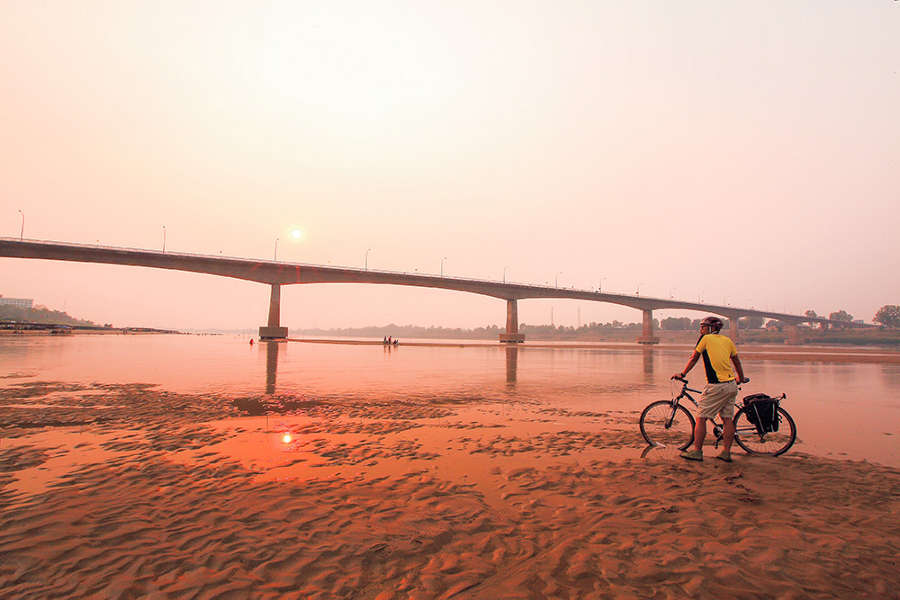 Wat Pho Chai, or formerly known as Wat Phi Piew due to this temple used as a place to burn ghosts or cremation and it had been widely known for scary ghosts. Later, in the Rattanakosin period, the temple has changed its name to Wat Pho Chai. It is considered to be a royal monastery of Mahayana, which is considered to be a monument of ancient importance of the province of Nong Khai.

During the Songkran Festival, there will be a merit-making ceremony for Luang Pho Phra Sai by summoning the Buddha image to parade around the city. Furthermore, every year on the full moon day in the seventh lunar month (around June), the people of Nong Khai will hold a rocket merit-making fair or Bun Bang Fai to worship Phra Sai at Wat Pho Chai, which is one of the important ceremonies of Nong Khai. This trip greatly matches the trend of the famous movie ‘Nakee (Naga)’. The story of Naga is a mysterious story and personal belief. However, this story has been with Thai people till today and no one can prove whether it is true or not. Even in Nong Khai, people have speculated that there is a trace of Naga in many areas such as Piang Din Cave, or the Naga Cave, located at Si Mongkhon Cave. Inside the cave, there are crooked hollows connecting all the area. Thus, the villagers believe that it is a path of Naga towards the south of the Mekong River. There are a story and beliefs that has been told around that to visit the cave, you must need a guide to lead you the way. Another well-known place is the Naga pond located at Wat Phra That Bang Puan. It is believed to be a sacred Naga pond, containing a 7-head Naga statue built at the middle of the pond. Thus, many people came to worship it. In addition, this pond is considered to be very important because the water in this pool is used for the coronation ceremony, allegiance ceremony and other sacred ceremonies in Thailand.

Wat Hin Mak Peng is well-known for being a place of Dharma practice of Luang Pu Thet Thetrangsi, a famous meditation master of Isan under Luang Pu Man Puritatto, whom the people respect so much. You can visit the temple and worship the Buddha image of Luang Pu Thet inside the museum pagoda, which displays the appliances of Luang Pu Thet.

Moreover, Luang Pu Thet was the person who initiated the temple as a Dharma practice center for Buddhist monks, nuns, and pilgrims. Wat Hin Mak Peng is compounded by a spacious, clean and shady with various species of plants amidst tranquility. The Mekong river view can also be appreciated from here as the temple is located near the Mekong River, where a lot of people love to take a picture here. 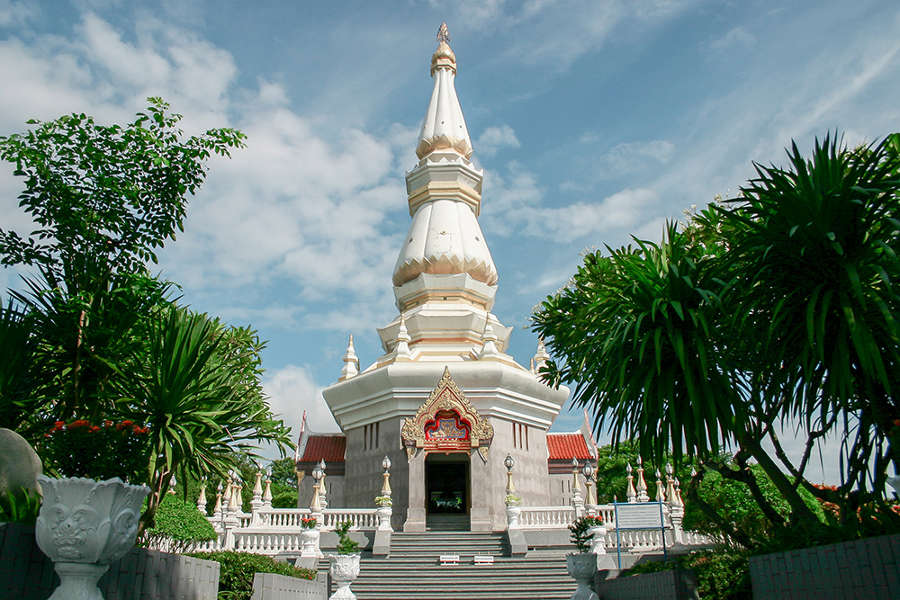 The skywalk at Wat Pa Tak Sua is a new landmark of Nong Khai province. It is the first glass walkway in Thailand. The pathway is extended to the cliff about 6 meters and 500 meters above sea level. This landmark has the most beautiful panoramic view of Nong Khai and Mekong River, especially during the fog season, when the sea water reduces, you can see the sand dunes that display the view of Naga scale and see the city of gold, located at Kam Phaeng Nakorn Luang District, Vientiane. Laos.

Although it has just recently open, it impressed various visitors. It is opened for a visit every day from 9.30 – 16.30. In addition, the atmosphere at Wat Pa Tak Sua is also a source of mental relaxation because of the greenery view of trees and beautiful Buddha statues for you to worship for prosperity. 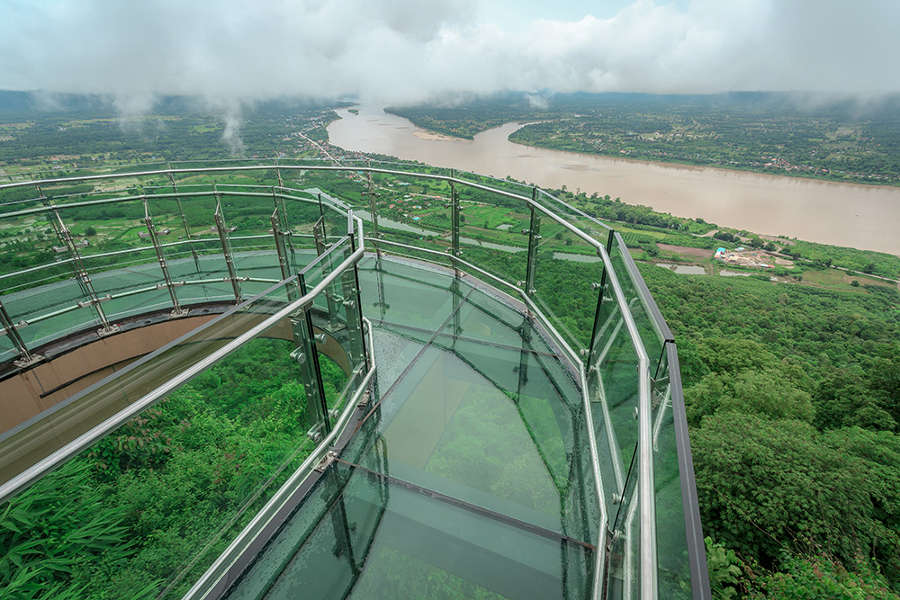 Wat Phra That Bang Puan is an important Mahayana temple that has a long history. There are many important historic sites. For example, the ancient Buddha image of Lan Chang, the Naga Buddha image, the stone inscription, stupa, pagoda and the relics of the Buddha. The temple was built in the style of Lan Chang architecture like the baked clay pagoda and the museum that exhibits archeological items. Furthermore, there is a Naga pond that is believed to be connected to the Mekong River. It is said that Wat Phra That Bang Puan is the only place in the world that has survived the 7 ancient sites from the past. Therefore, this is another landmark that should be included in the traveling program. 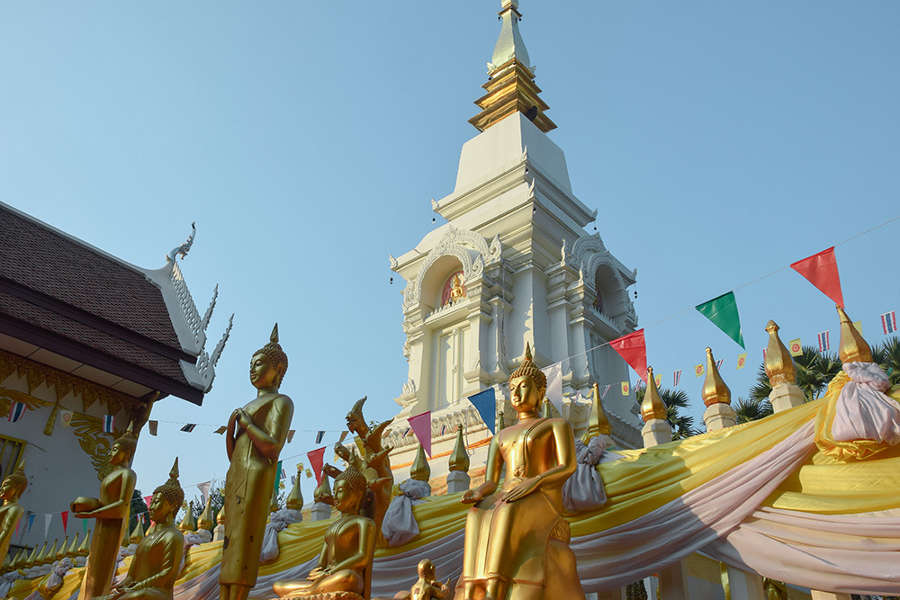 Tarnthong Waterfall is located not very far from the city, at the intersection of the entrance to Wat Pi Tak Sua. This place is considered to be a popular natural attraction of the people of Nong Khai and visitors since the waterfall is very beautiful and it is created from Huay Tarnthong, where the stream flows through the stone yard with the height of more than 30 meters and length of 2 kilometers. The end of the waterfall flows into the Mekong River and there is also a water basin where you can go down and play. Moreover, the surrounding area is an arboretum with dense forest. The forest is a dry, evergreen forest mixed with deciduous forest to create a good environment.


The best time to travel to this waterfall is during June-October because the water is very playable. If anyone wants to stay for the night, there are some areas that can be used for camping, there are several restaurants, local shops and bathroom is quite convenient. In the past, it was a permanent border between Thailand and Laos. Cheap products from both countries are sold here. Although in the present, the post has been moved, the market is still popular for many tourists. Some of the main purposes of the trip to Nong Khai is to go shopping and eat delicious food at the Ta Sadet Market.

Ta Sadet Market, or otherwise known as the Indochina Nong Khai Market, is located along the Mekong River selling several of products from Thailand, Laos, China, and Vietnam. The products include silks, woven clothes, bags, shoes, electrical appliances, cookware, handicrafts, OTOP products, snacks, processed food, desserts, coffee shops, etc. The area around the market has Vietnamese food since there are a lot of Thai-Vietnamese people living in Nong Khai. Every Saturday evening, there is pedestrian street food for you to try and have a taste.

The market is open every day from 7.00-18.30. Near Ta Sadet Market, there are 100-years-old buildings lined up for you to take a picture. Ta Sadet Market is also a scenic attraction on the bank of the Mekong River. Looking across the river, you can see the port of Laos. If you want to stay for the night near the Mekong River, there are various accommodations available.

It is located at Amphoe Mueang, Nong Khai Province. 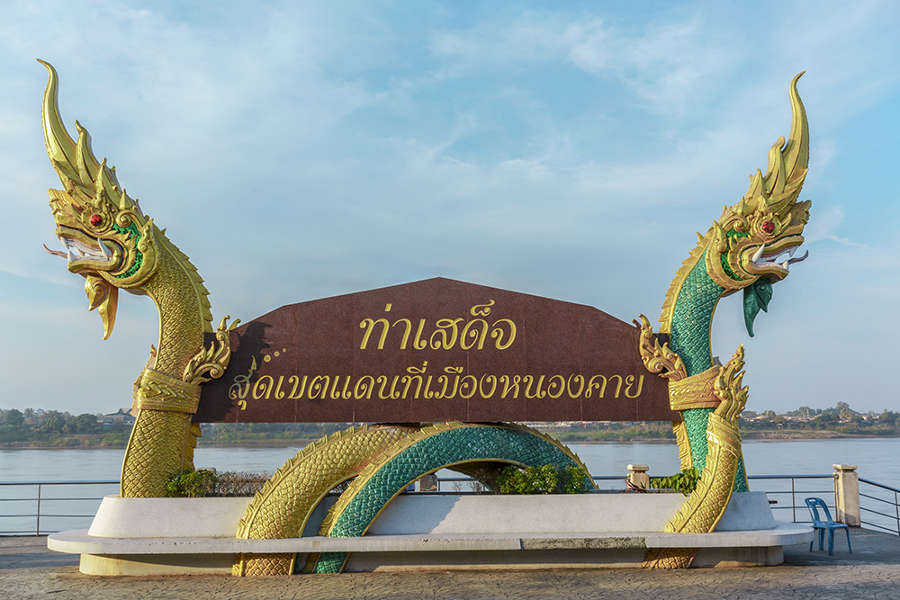 The highlight of Amphoe Sangkhom is the hill, Phu Huay Isan, which is the unseen beauty of Isan. Tourists often visit this hill to view the sea fog over the Mekong River, especially during winter. From November to January, you can see the beautiful scenario of white fog over the hill. Phu Huay Isan does not allow tourists to drive up to the hilltop, therefore, tourists must park their cars below at Wat Kaew Sadet Chai Mongkol, where there is a car park. After parking the car, you can take the local transportation of local people to the hilltop, which only cost 60 baht each. The transportation will take you to the highest viewpoint (there are many transportation services available). However, you will have to wake up quite early because local transportation is available at 5 a.m., which is the best time to see the sea fog. Apart from the sea fog, you can also see the sunrise and beautiful nature of Phu Huay Isan. Nong Khai Aquarium or Sirinthorn Aquarium is one of the most beautiful and interesting landmarks of Nong Khai province. It is suitable for all the family. The aquarium is located in Khon Kaen University, Nong Khai campus. This place is considered to be an education center on fisheries research and fisheries in the Mekong basin, as well as being the largest aquarium exhibition in Isan and the first to get close to the underwater world of Mekong River. It exhibits a wide variety of both freshwater and sea fish but focuses on the freshwater fish.

At this aquarium, there is an underwater tunnel of 10 meters long, simulating the atmosphere of the underwater world. Moreover, there will be a fish feeding show for you to watch every day. It is open on Tuesday-Sunday (closed every Monday and public holidays) from 9.00-17.00. For the admission fee, 30 baht for students and 50 baths for adults. 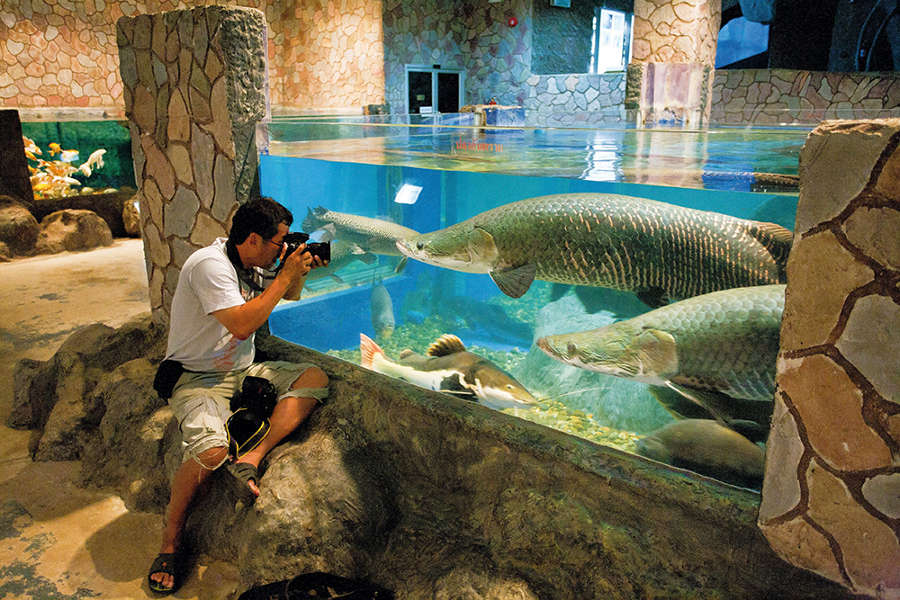 A Must-Visit Restaurants in Nong Khai