This time, our trip will be going to the Northeastern border in a small town alongside the Mekong River, the province of Nakhon Phanom. The charm of this province lies in the diverse culture of Tai tribe, which has its own way of life. Nakhon Phanom also has good weather, beautiful scenery and classical architecture with a long history, as well as tasty foods, which is worth visiting.

Nakhon Phanom is a province known as the land of holy relics. Phra That Phanom (pagoda that keeps the relics of Buddha) is an important place of worship for Buddhists, both Thais, and Laos. It is located on a higher hump than other areas called Phu Khampha, which is enshrined in Wat Phra That Phanom Woramahawiharn. It is said that this place has been built for more than 2,500 years ago by Phra Mahakassapa Thera and 500 Arthat. The pagoda is a rectangular pagoda built by bricks, which is carved in an ancient pattern similar to the Dvaravati arts. The purpose of it is to contain the relics of Buddha (the Buddha’s breast bone) brought from India. Phra That Phanom is the relics of those who were born in the year of the monkey and on Sunday. Every year, there is a great tradition that has been held since the past, which is the worshipping of the relics. The event will be held on the 3rd lunar month every year, beginning on the 10th day of the 3rd waxing moon and ending on the 1st day of the 3rd waning moon, a total of 6 days and 6 nights. On these days, Buddhists will come from all over the country to celebrate and worship Phra That Phanom every year.

It is located on That Phanom District, Amphoe That Phanom, Nakhon Phanom Province. 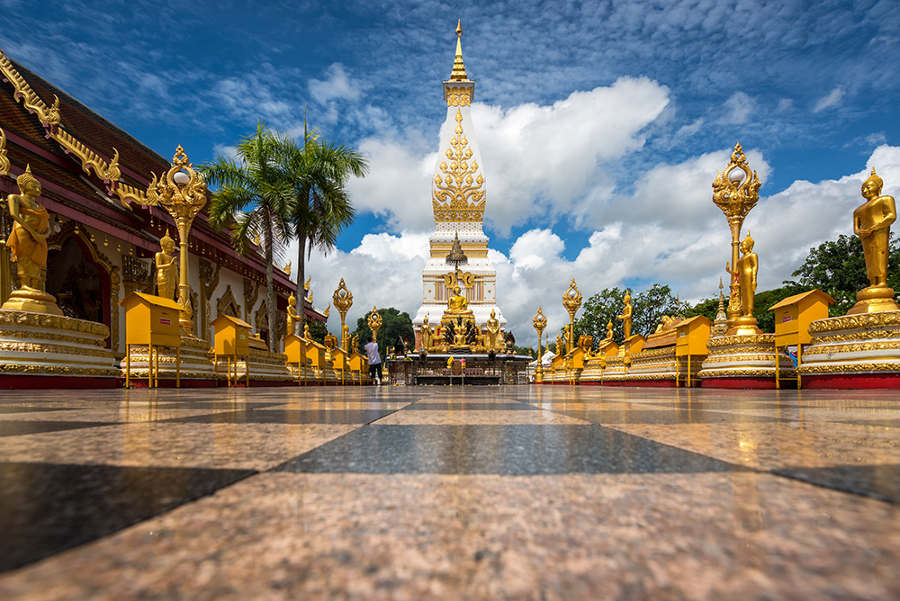 With this city adjacent to the bank of Mekong River, when coming to Nakhon Phanom, you should not miss relaxing in the green area along the Mekong River. You will get to see the beautiful scenery of Mekong River in a panoramic view and watch the mountainous scenery Laos. Enriched with the feeling of peace and calm, at 17.00 of every day, there will be a boat cruise down the Mekong River for tourists. The boat will travel along the coast of Thailand and Laos, in which we can see the way of life of people on both sides that are very simple, allowing you to relax along with the atmosphere. The boat will take about 1 hour and a half for only 50 baht per person. For charter group, the price will be 1,000 baht. In addition, if you don’t want to take a boat, there is a bike for rent. There are bike lanes along the Mekong River for you to enjoy the scenario. Moreover, nearby, there are various tourist attractions of Nakhon Phanom such as the Vietnam Memorial Clock Tower, Nakhon Phanom’s Former Governor Residence Museum, Library in Honor of His Majesty the King, and to the very end is the Saint Anna Nong Saeng Church. Some people come to Nakhon Phanom just to have a walk and lie down watching the Mekong River. This scenery is enough to add some good energy to live. No need to go anywhere else and you can be filled with happiness here. In the past, this residence used to be the personal property of Phraya Adulyadej, Siam Mesuanphakdee Phiriyapaha (Ui Nakornthap), the first governor of Nakhon Phanom. It is a colonial art design two-story yellow building, influenced by construction from France during the Indochina War, built by a Vietnamese architect. The construction method is very elaborate. The upper and lower floors do not have pillars and without a single nail. Although the building is already old, it still maintains the original condition very well. At present, the Fine Arts Department has registered this landmark as a historic site and make it an important historical attraction of the province assigning it as a museum of Nakhon Phanom.

On the lower floor, there is an exhibition that shows the old pictures of Nakhon Phanom. There is also an exhibition to commemorate the first governor of the province to the present. Moreover, there are various simulating rooms with furniture that were actually used in the past. On the upper floor, there are the tabernacle, the hall, and bedroom. Whereas the rear building has been renovated into a powerhouse to show the history of everything from the past to the present of floating light. The tradition of floating light a famous tradition of Nakhon Phanom that is difficult to find.

The most important thing about this place is that in the past, this was the place of honor of Nakhon Phanom. In 1955, this place was the residence of King Bhumibol Adulyadej (Rama the IX) and Queen Sirikit when His Royal Highness had visited Nakhon Phanom to perform some duty and saw the floating light for the first time. It was an unforgettable impression of the people of Nakhon Phanom. 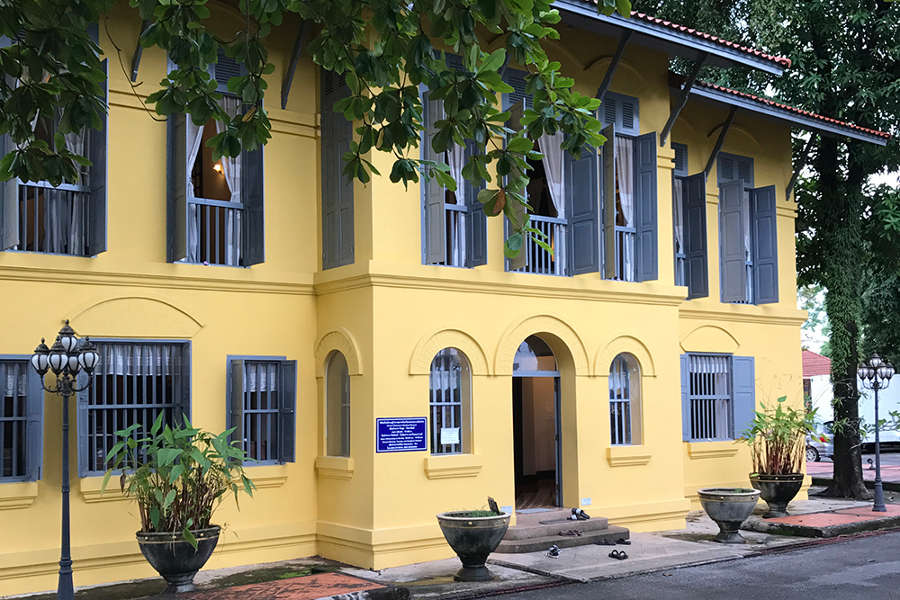 Saint Anna Nong Saeng Church is the oldest Catholic church of Nakhon Phanom located along the Mekong River and was built by Archbishop Eduard Namlap, the bishop of the church. The highlight of this church is the double tower with high spire, prominently characterized by a beautiful appearance, inspired by the colonial architecture. This church is the symbol of the city with many people from different places live together with such as Thai, Vietnamese, Lao, Chinese, etc. Originally, this church was used as a place for the religious ceremony of local Catholic, but when the French bombed Nakhon Phanom, the church was damaged. Later, the church was renovated for people to perform a religious ceremony. Furthermore, before Christmas, in each community of Nakhon Phanom will produce various types of star and gather at the Saint Anna Nong Saeng Church, which is considered to be another tradition of that has been carried since the past to the present. It is a tradition that has received much interest from foreigners as well. 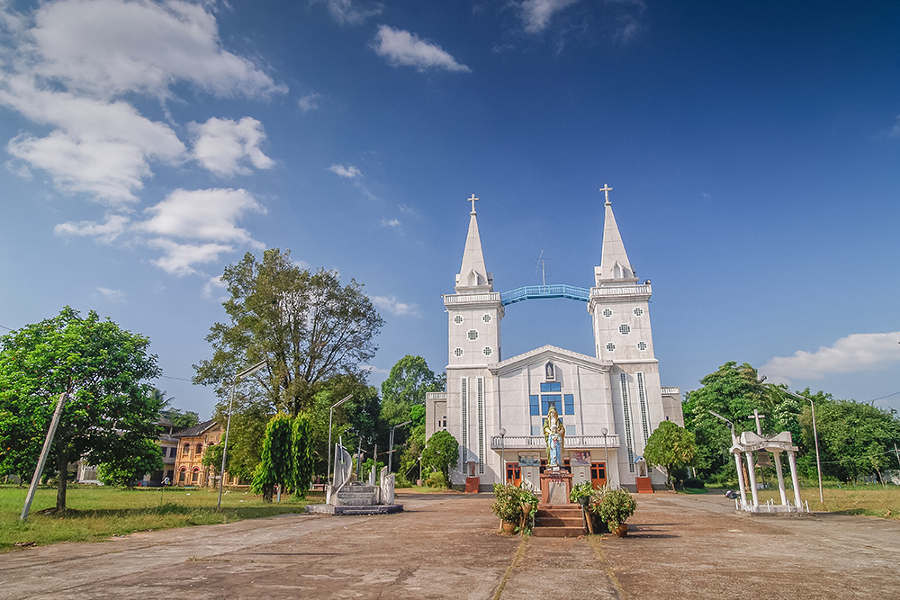 Known as the “Thai-Vietnamese Friendship Village”. Nakhon Phanom is considered to be a province that has a good relationship with Vietnam for a long time. The important historical site of the two countries is Ban Lung Ho or Ho Chi Minh’s House since it used to be the residence of the former President of the Republic of Vietnam, Ho Chi Minh. Ho Chi Minh used to live at Ban Nong Chok, Nakhon Phanom during the year 1923-1931 to call for independence of Vietnam from France. This house has been inherited from generation to generation. Today, it is a place filled with history and the life story of Ho Chi Minh when he lived here. This historical landmark is located behind the house of Ho Chi Minh’s close friend. It is surrounded by various trees that Ho Chi Minh had planted. The interior of the house is divided into 3 rooms, arranged according to the original atmosphere, both simulated appliances and photos of Ho Chi Minh in the past. Apart from visiting the house, 300 meters away from this landmark, was the site of the construction of the Thai-Vietnamese Friendship Village in 2004 and Ho Chi Minh’s Memorial Monument. Inside, there is a wax model, house model, and appliances of Ho Chi Minh to commemorate President Ho Chi Minh, who had once refuge in Nakhon Phanom. It is opened for visiting for free from 8.30 – 16.30. Phra That Renu Nakhon is another holy relic that is famous in Nakhon Phanom Province. It is enshrined at Wat Phra That Renu Nakhon, built in the year 1918 by simulating the original Phra That Phanom. It is the relics of those who were born on Monday and is believed that those who worship it will receive virtue, resulting in beautiful skin, like the moonlight. In addition, within the temple lies the golden Buddha statue in a sitting position, inspired by Lao arts, which has a very beautiful Buddha image. Moreover, this temple also has the Tripitaka, the relics of Buddha, the relics of Arthat, jewels, and other valuable items that the city government and the people donated. 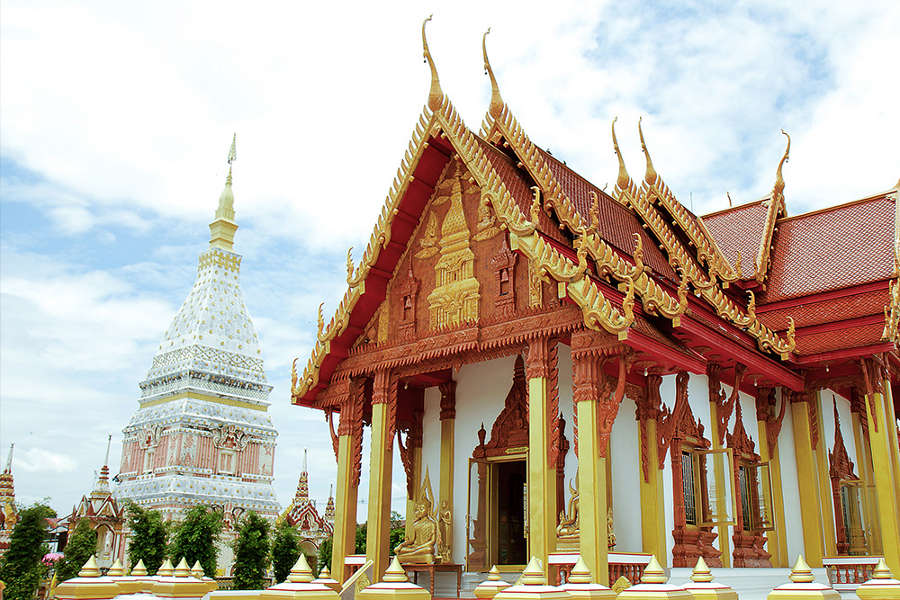 In addition to strolling through the classy old town area, in the evening of every Friday, Saturday and Sunday, there will be an event called Nakhon Phanom Walking Street, which is known as Thong Chom market, located on Sunthornvichit road, next to Mekong River. The walking street starts from the Tourist Port and ends at the Vietnamese Memorial Clock Tower. The distance is not very long and it is not overcrowded. You can enjoy your time and walk comfortably looking through each product from the store. There are various shops for you to go on shopping, especially clothes, second-hand equipment, souvenirs, and food. Local foods are also available here at this market. Do not miss to taste the Grilled Sticky Rice, the snack of Northeastern (Isan) people. Especially during winter, this area is good for strolling around and have a nice shopping. Furthermore, apart from shops on the walking street, nearby also has an old building which is still open as restaurants, serving food and drinks, under the atmosphere of harmonious music. Come and enjoy the happiness here at Nakhon Phanom Walking Street.

The third Thai-Lao Friendship Bridge is a bridge that connects Thailand (Nakhon Phanom) to Laos (Khammouane). The construction was completed in 2009 and is located only 13 kilometers away from Nakhon Phanom. The architectural features are unique and beautiful and the bridge area can also see the view of the Mekong River that separates the two countries, as well as beautiful complex lined limestone mountains from Laos. In addition, it is the bridge that helps drive the economy and tourism of both countries, as well as to transport people from each side comfortably. If anyone travels to Nakhon Phanom and wants to visit Laos, you can come to the crossing point here at this bridge.

It is located at At Samat District, Amphoe Mueang, Nakhon Phanom Province. 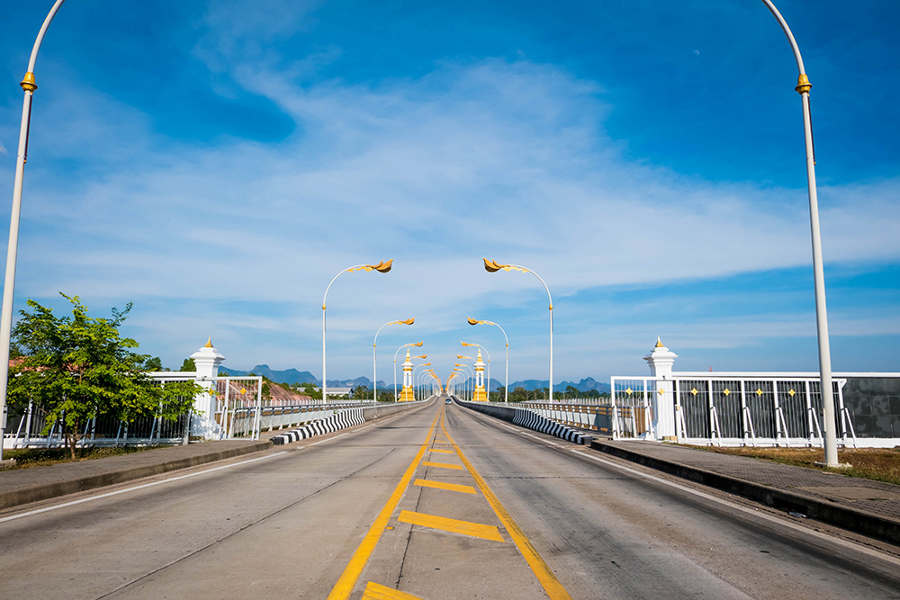 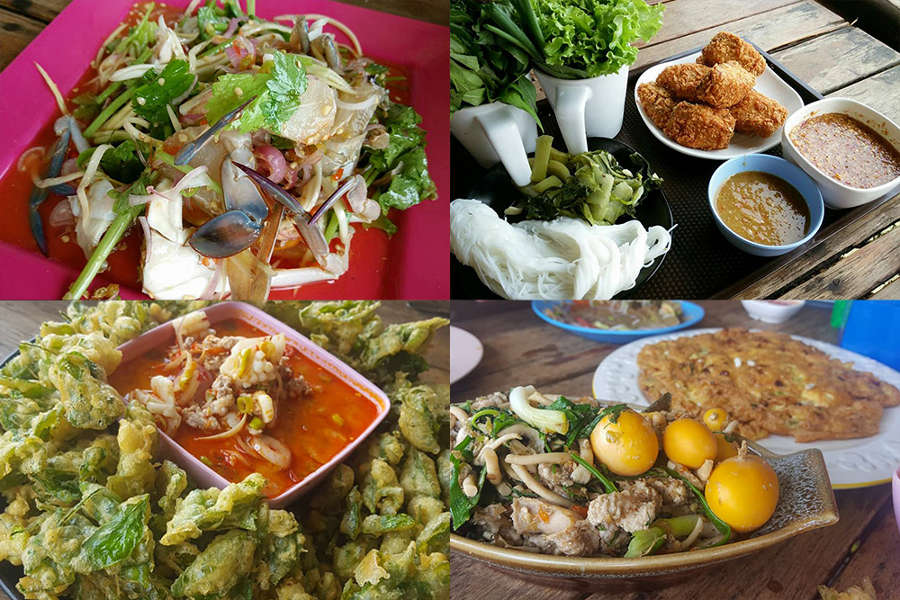 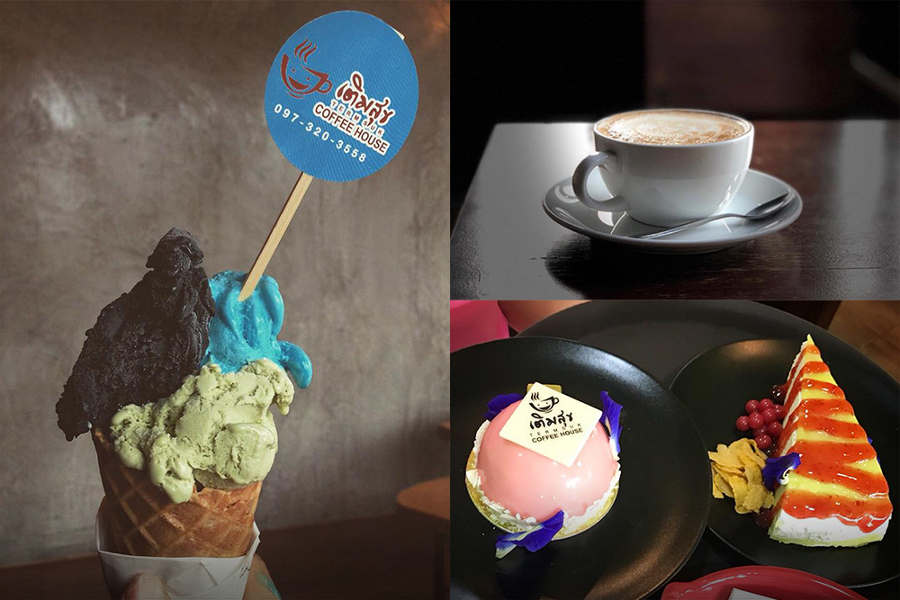 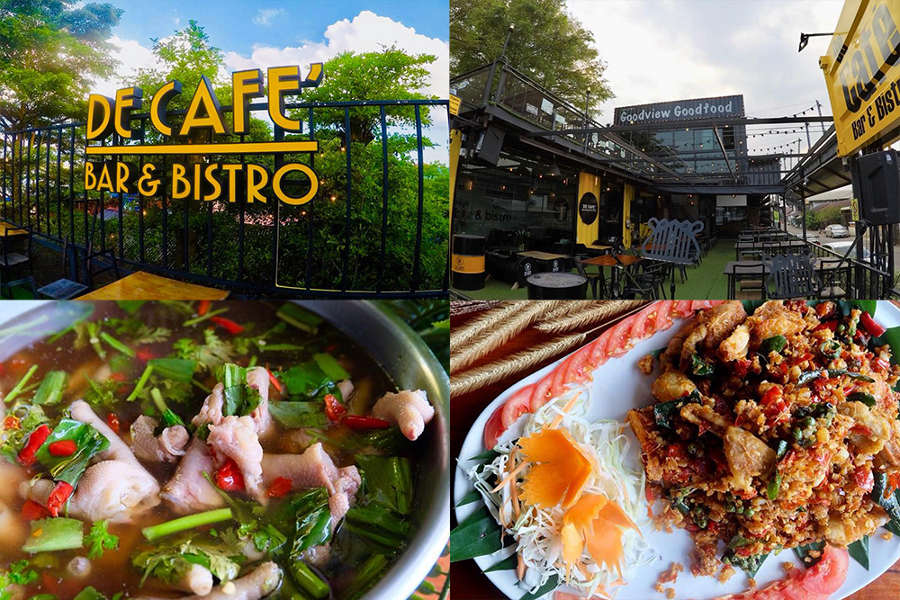