“CHAIYAPHUM” Roaming in the Rain

“CHAIYAPHUM” Roaming in the Rain

Chaiyaphum, a north eastern province, famous of its magnificent nature is inviting us to visit the full bloom meadow of rosie colored SiamTulips that comes greeting the rainy season. During the season, there are lots of tourist attractions in Chaiyaphum such as wildeness forests, flowers meadow, streams and waterfalls for all to be overwhelming of contentments among natures.

Phra Maha Thad Rajamonkolchedi Siri Chaiyaphum or Phra Thad Chaiyaphum with its height of 21 metres, is one of the prominent Buddhism religious sacred places. Situated distinctively with grace at Arun Dhamma Sthan on 60 rai of land area over the Chong Lom mountaintop, it is built in the old pagoda castle-like characteristic on top with Jaranum arch (an arch to place buddha statues). The pagoda crown is overlayed with golden bronze plate and gilded with gold leaf according to the combination arts of Lanna and Lanchang. The apex is four directional enshrined with Buddha statues in stopping the rainstorm attitude.The holy relics of Lord Buddha is enclosed within and all around the cloister area many Buddha statues in various attitudes have been placed. This is quite a simple style of an architecture but renders no less beauty at all. The place is for religious retreat and practices as well. The atmosphere of mountaineous, trees, cloud mist and streams surroundings provide a tranquility and a pleasant cool as suitable as a place for religious practicers all year round. At night this place is just like one of the most top grade observatories of Chaiyaphom.

Pah Hin Ngam National Paark used to be called Pah Thep Stit on believing that this district used to be a habitation for deities in the past. During Buddhist Lent there would be a full bloom meadow of Siam Tulip as to worship the deities. The highlight is the Queen of Rain Forest or Siam Tulips Meadow or heaven lotus field which will be in fullest bloom from Lan Hin Ngam area up to the view point. These rosie colored Siam Tulips in full bloom will be waiting for us in just two golden months until August every year. The impressive unforgettable photos have to be taken while the morning mist still lingers over the Siam Tulips in the Siam Tulip meadow. There are plenty more interesting attractions in the National Park such as Lan Hin Ngam, the highest peak which is a vast stony area covering more that a thousand rai of land. There is a rocky cliff stretching horizontal into the air which is named as the highest viewpoint of all covering 3 regions of the country: North-east, Central and North. A very fresh air, a far far away landscape, a view of Pang Peay mountain ridge and conserved forest area of wildlife sanctuary of Sub Langa Forest, which is a full fertiled forest resouces of Chee and Pah Sak rivers headstreams, would be in your embrace. On standing atop over there despite an intimidating feeling of height and empty space around you, when we are at the right spot, to retrieve back for fear is out of question. Photos must be short to certify that we have been there for real.

Tad Tonewaterfall is one of the beautiful waterfalls located in Tad ToneNational Park near Chaiyaphum town. There is an asphalt road leading conveniently all the way to the waterfall. Height of the waterfall is 6 metres with the width of 50 metres. The water stream runs down from 2 stone pavements above forming a huge majestic waterfall curtain. Plenty of trees renders handsome cool comfortable atmosphere so suitable for relaxation, nature appreciation, fresh air inhale and swimming to lessen the heat. There are lodgings, camping area, shops and  foods available for tourists who could entirely visit all the times as Tad Tonewaterfall is always in full stream all year round. The most spectacular period will specially last in rainy season during June to October. Wildlife and adventure lovers should not miss this Thailand Safari because this is the most fertiled forest reservation of the country and it is the only north-eastern forestry culture for various wildlife such as baking deers, does, mouse deers, pheasants, birds, etc. All animals will be naturally brought up to breed and reproduce by themselves. There are also educational routes among lush green of the forest which enable the closed observe of birds and butterflies spots. Roaming about the forest and other activities are also available. The highlight of the place will be the vast area of 5,000 rai of land with a bowl appearance in the middle of the forest, hence, came the name, Kamang (bowl), of the area.

Tung Kamang is one of royal projects of HRH Queen Sirikij in capacity to reserve wildlife animals and bring them home. This is a rich fertile land for herbivores because of the complete nature with water running through. The area is also surrounded with tropical rain forest and partial forest of pine trees alternating with Hieng and Kor trees. There are simple dwellings amid nature of handsome views and ozone for those who want to spend their nights over.

Chulabhorn Dam alias name is Nam Prom Dam, was built to block Prom water way located on Khun Pai mountain range at the area called Phu Youk. This is a miscellenous dam under care of Electricity Authority of Thailand in order to produce electricity power and provide irrigation to agriculture at the same time 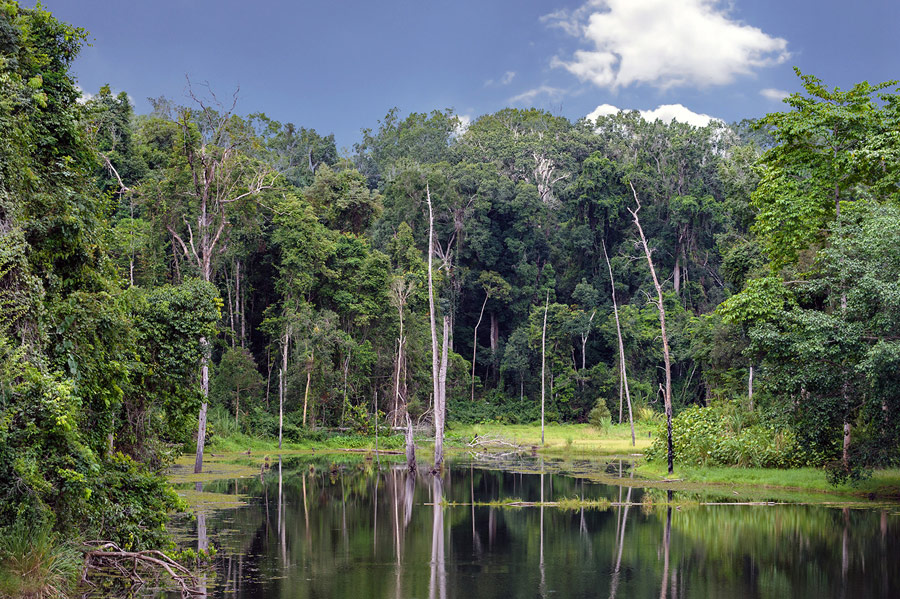 The dam’s reservoir is also a breeding place of fresh-water fishes. Head part of the dam is an interesting place as this is a place of Sirisataraj Buddha replica. Chulaphorn dam garden in a conserved forest style is surrounded with many interesting places such as Lup Kwon pavilion view point to take a picturesque views of 800 metres above sea level, an experimental center for rare winter flowers/fruits and an observatory. The premise of the dam is calm with cool atmosphere and fresh air, inside there are lodgings, restaurants and boats to sail along the dam for visitors.

Mo Hin Khao or Thailand Stonehenge, one of the landmarks of Chaiyaphum, is a site of peculiar huge white standing stones created naturally by the accumulation of sandstone sediment and hardened earth clay to become many million years of dissimilar stones shaped. These stones scattered around a boundless area of Phu Lan Kha National Park with the distinctive of high 5 stone pillars. 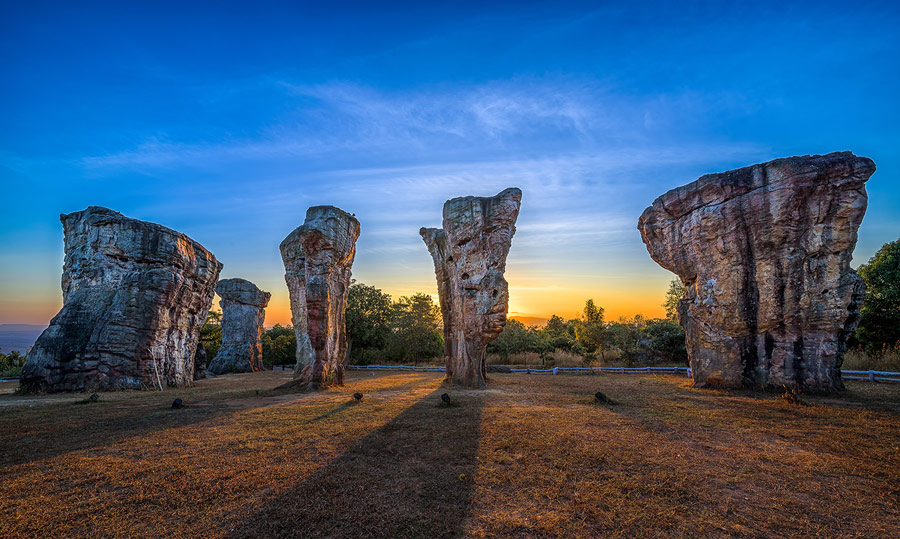 Visiting in rainy season, the ground area will be filled with flowers field and lush green forest. Everywhere around will be fresh of cool air with no air conditioned unit needed. The place is a fine spot to view such a wonderful sunrise in the morning and glittering starlights at night. Overnight camping with own tents could be done on the tenting area. Walking up further to the scenic point, Pha Hua Nak cliff which is one of the attractive view points in Chaiyaphum will submit the endless scene of immensed forest and the far far away skyline to your sight.

When HRH King Bhumibhol Adulayadej and HRH Queen Sirikij graciously came to visit Chaiyaphum, HM the King and the Queen had overnighted at the Green Palace which originally was a Chaiyaphum’s governor residence. At present this Green Palace is situated in the governor residential premise on capacity of a valuable conservation of a historical study center. The exhibition at the center has composed of two parts; first part is the Upper Ward consisting of various rooms that HM the King and the Queen used to preside over such as royal sleeping room, royal tea room, royal living room, royal study room, royal dining room and royal private appliances displaying room, the inclusions are the historical royal visit pictures of Chaiyaphum and north-eastern of that time. The second part is the Lower Ward consisting of Chaiyaphum cultural learning center’s exibition of silk weaving and unique Mat Mhee, of more than 150 patterns, cloth weaving. Some rare pieces of cloth are more than 100 years old.The Palace open for public everyday during 10.00-12.00 hours and 14.00-16.00 hours except official holidays.


Sai Thong National Park, a birthplace of various water ways and extreme richness of nature, engaging in an area of 199,375 rai of land with the adjacency to premises of Pah Hin Ngam National Park and Phu Lan Kha National Park. There are many tourist attractions such as Pha Hum Hod which is a one-metre long stone bar stretching out to the air from the cliff. It’s such a horror to take a picture at that spot but at the same time this is a reward of the nicest picture of all. 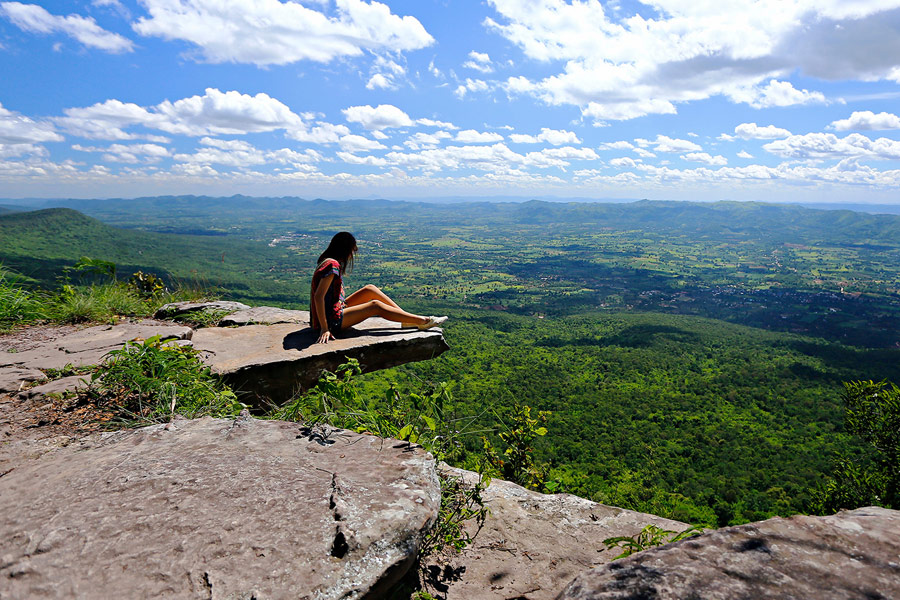 No, if this is not so terrifying enough, you may try the abseiling down from Pha Hum Hod cliff to be more excited. Timid persons may just go strolling along the walk way for nature appreciations. On the way, there are a pleasing Sai Thong waterfall running through the stone pave to a large basin down below namely Wang Sai which is so magnificent.

In cold season, there is a boating activity for nature study in Wang Nam Kiew dam with comfortable cool air.Tents accomodation on the cliff pave could be possible or a park’s residence would also be a choice. This is a lifestyle could not be found in the city: to wake up in the morning watching a sunrise and a sundown in the evening, continuing with gazing at the moon and the stars at nightfall. The purity of air is another gift included for your refreshment.

Prang Kuu is a place for ones who are fond of history because of its pristine and most perfect ancient site in Chaiyaphum. The assumption stated that this is an Arokayasal or a hospital site in the past because of its characteristic plan is identical to Khmer Palace built during King Chai Voraman XII in 18th Buddhist Era by Phra Paisachai Kuruwaitunprapa. The whole Prang Kuu was built from laterite with one principal pagoda in the middle. There is one Vihara or Bunnalai in front and the entire site is surrounded with Kopura or a frontal arch. All parts were constructed with laterite except the door and window frames and decorated pillars are in sandstone. 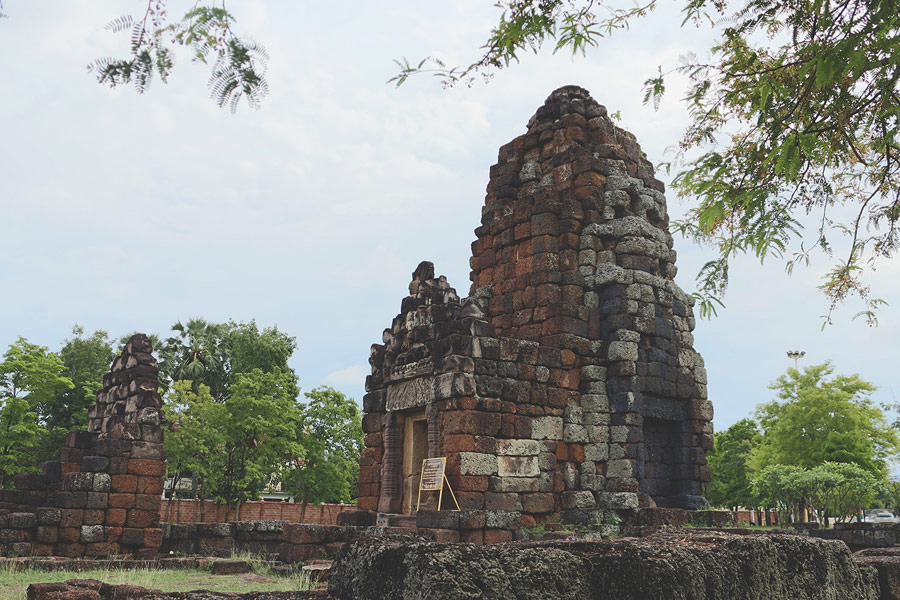 Prang Kuu is a place for ones who are fond of history because of its pristine and most perfect ancient site in Chaiyaphum. The assumption stated that this is an Arokayasal or a hospital site in the past because of its characteristic plan is identical to Khmer Palace built during King Chai Voraman XII in 18th Buddhist Era by Phra Paisachai Kuruwaitunprapa. The whole Prang Kuu was built from laterite with one principal pagoda in the middle. There is one Vihara or Bunnalai in front and the entire site is surrounded with Kopura or a frontal arch. All parts were constructed with laterite except the door and window frames and decorated pillars are in sandstone.

A local food of Chaiyaphum called ‘Mum’ is having a similar taste and look of a sausage. The only one different ingredient added to Mum is liver. One of the famous Mum restaurants in Chaiyaphum is Nat Pop Mum Dang restaurant which provides pork Mum, beef Mum to take home for grill or fry as we like. You may also bake Mum to eat with sticky or steamed rice or alternate to other menu will also be a delicious dish. There are other well-known restaurants as following; 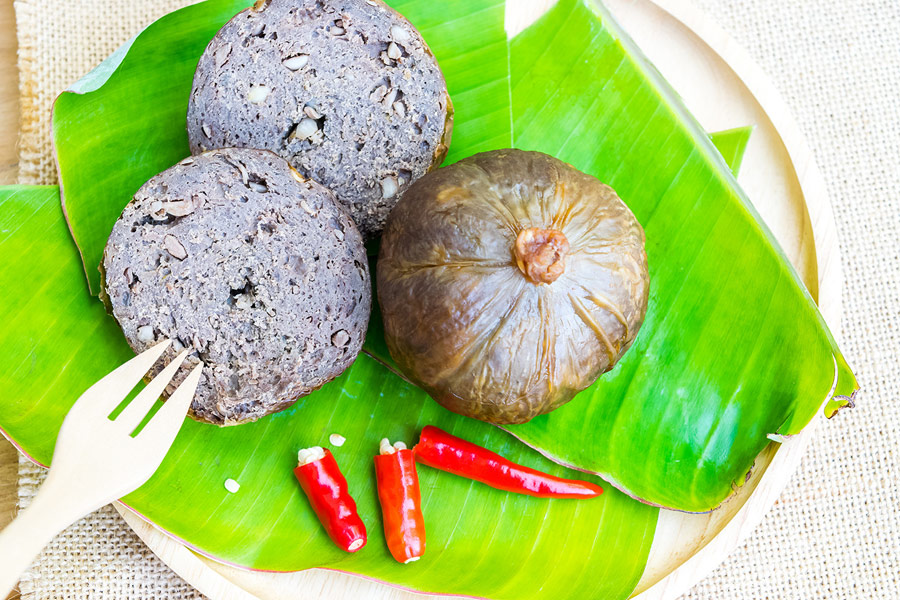