Courage, Farsighted, the Way of Survival in the Disruption Era ep.2

Courage, Farsighted, the Way of Survival in the Disruption Era ep.2

The change of the 21st century has nothing to shake the world as much as “the disruption of the digital technology” that makes many successful businesses to stop and go bankrupt. For example, the arrival of E-Commerce has an effect on the traditional retail, Fin-Tech has an impact on banking business and the new digital content such as Netflix has overcome the blockbuster and shakes the Hollywood, etc. These changes are happening everywhere increasingly. 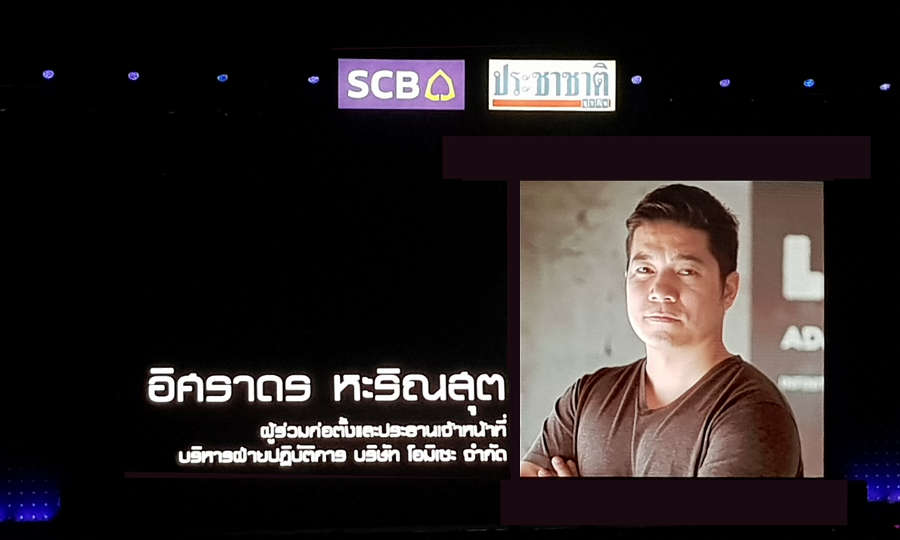 Being Farsighted, a Step to New Opportunity

To be a startup, pioneering new business amidst the competition with big organizations, may look like something impossible. However, that’s not the case for Ezra Don Harinsut, the COO and co-founder of Omise Co., Ltd., who developed the new Payment Gateway. He saw the opportunity in the payment business and grab that opportunity. Omise becomes the rising startup that is very successful in Thailand, closely reaching the same level as Unicorn startup. “At first I was interested in E-Commerce. The idea is to build an online sales platform. We really do see that the payment process is very important for the online sale. What is the best way to make money online? At that time, the payment is offline, such as ATMs. At convenience stores, paying with credit card has to be filled out a lot of information. We see the pain point here, thus we want to make a payment gateway that can make payment easily in just one simple click, where we can change the customer into profit.” Mr. Don explained about the beginning of Omise.

Starting in 2015, within a few years, Omise has become a widely used payment gateway in both SME and corporate sectors. “Customers using the Omise system can close sales from 50% to 90%. Our system can also solve client drop off issues.” What is the strength of Omise? “The strength of Omise is UX (User Experience), Global Standard Security, Visa Master Card Standard and High-Service level, as well as innovation.”

Even though Omise is known as the rising star of startup, Mr. Don look further beyond to develop Omise continuously. “We are studying the Blockchain technology to be use in payment system and we want to make a network link to use Digital Asset across the group freely…Digital payment is growing. The main point is to be able to provide more cashless store. Omise is the middleman here. Using cashless also brings valuable information to service provider.” At the same time, Mr. Don also talked about the management of Omise during disruption. “Must be ready for changes all the time when the strategy you use does not work out anymore. If I were to compare my business with an animal, I would say it is like a ‘chameleon’ that is adaptable to any environment. And when it sees a victim, it will quickly flick its tongue to catch the victim.” Seeing the opportunity and grabbing it, will soon send Omise to the same level of success as Unicorn startup. 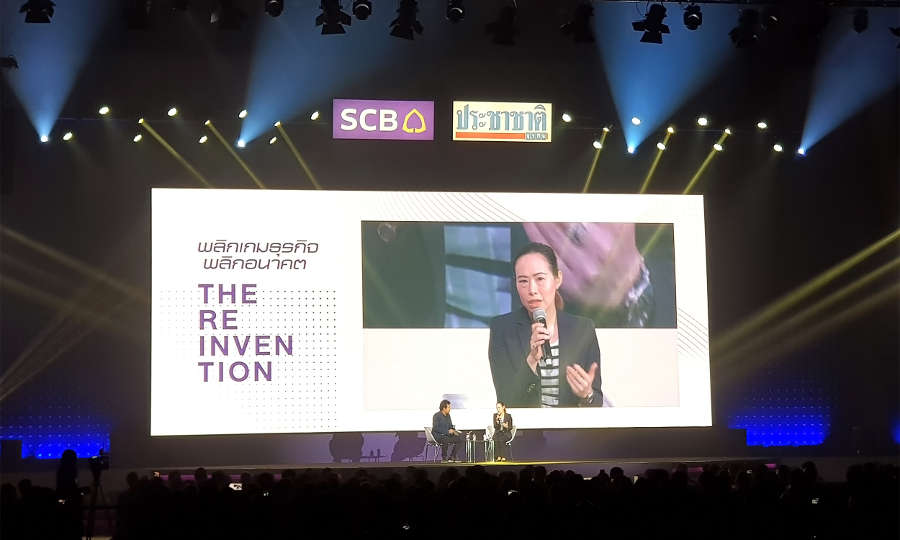 Not just startups that are farsighted, but business that dominates the market share like Thai Summit Autoparts Industry Co., Ltd. too. Being farsighted has pushed Chanapan Juangroongruangkit, Vice President of Thai Summit Group to look for bigger success. “People have told us that the market is already good in our country. But we came to think that it would be better if we were going to set up a factory to support our overseas production base. When ordering any products to deliver overseas production base, they can order from us only, instead of having to go to many suppliers.” Ms. Chanapan discussed the day when she decided to step out of her comfort zone, bringing her business to global by launching an overseas market to serve the needs of customers, global car manufacturers amidst other people’s opinion that success in the Thai market is sufficient.

“The most important thing is to change the mindset of the people involved. To see bigger targets. We want to grow internationally and globally, to be a world-class manufacturer.” Ms. Chanapan explained about the time she launched her business in India. “Changing the mindset of our people to be more courageous, we must let them see. When going to India, a country that is not very convenient, I went there by myself and bought the land by myself. I made them believe that I can do it and whatever happens, the parent company will always be ready to support.” Caring for the staff members is also one of the reasons that send Thai Summit Group to success. “We need to honor the people we sent to work that he is talented because each work is not easily done. As a boss, I need to let them see, I cannot pretend in front of my employees. This is my lifestyle. When working in the factory, I also wear working uniform. This make the employees have engagement with the organization and be ready to move towards the aim.” Ms. Chanapan concluded. 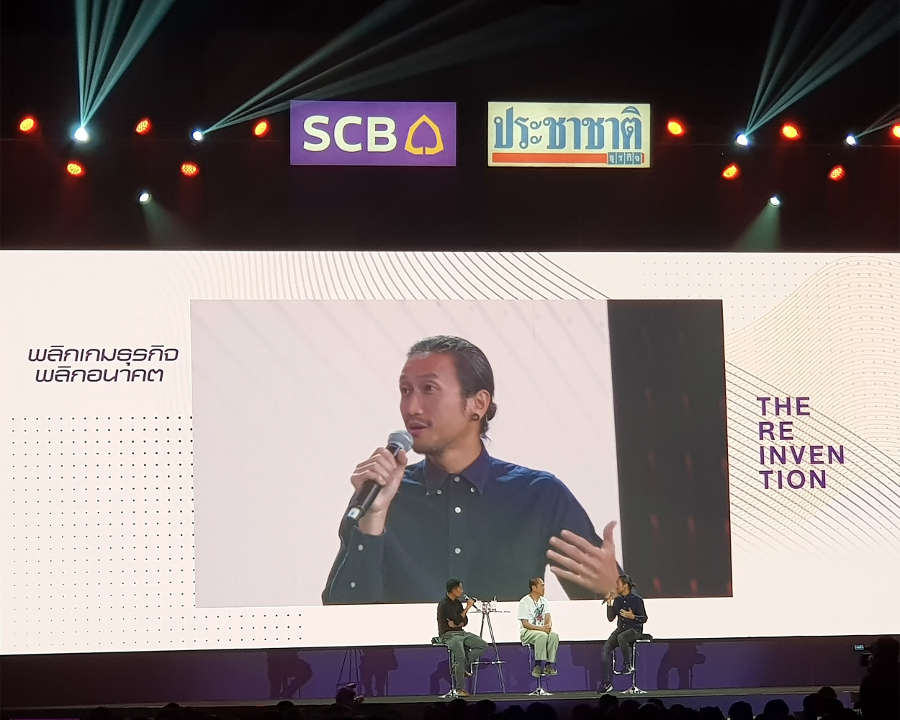 Plan Well, Success is Not beyond Reach

In the end of 2017, the person who became the talk of town and created the biggest phenomenon throughout the country is none other than Artiwara "Toon" Kongmalai, the lead singer of Thai rock band Bodyslam. He has done a Betong – Mae Sai marathon runs from the southernmost point to the northernmost of the country. This marathon, under the project “Kao Kon La Kao” (Step by Step) is to find donations for 11 hospitals nationwide. Previously, he ran for over 400 km, raising funds for Bang Saphan Hospital. Other than courage and faith, an unusual run from the southernmost to the northernmost, with the distance of 2,215 km, good planning is important to make it successful. “When I think of this project, the idea is based on helping more than just one hospital. It is about helping 11 hospitals. We have to think about the amount of donations and distribution to make a concrete change.” Toon relayed the story of the beginning of “Kao Kon La Kao” project. “Then we set the problem and start to plan. We calculate how much time we need to spend. We think of the end result of our help within our approach. We take the numbers into calculation and think of the possible way to accomplish this.”

Faith, courage and good planning are what makes Toon, the lead singer of Bodyslam to achieve the goal of creating a miracle of the project "Kao Kon La Kao" and can raise fund according to target. For the question of what Toon has learned from the running marathon, he replied that he was lucky to have known the how to run. It helps him to forget the distraction that occurs when the singer feels that his dream career has become routine. The runway is a new area for him to reinvent himself, discover new identities in what has never done before, learn something new and then come back to have strength again. 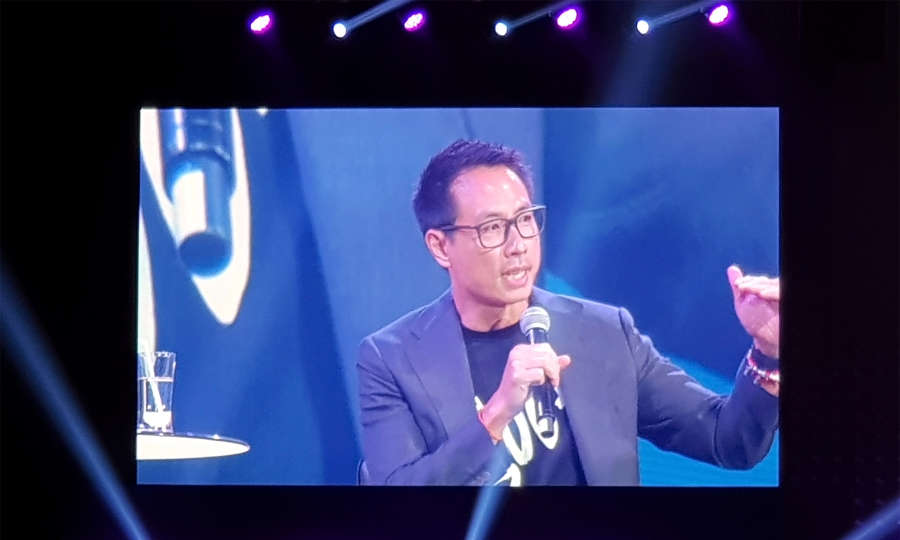 Good planning, asides from leading to success, is also important for dealing with future changes. Chanond Ruangkritya, the President and CEO at Ananda Development PCL, one of the leading real estate, the owner of condominium project near BTS Sky Train around the city, recounted the time he reinvented his family business in the aftermath of 1997 crisis. He restructured his family business by presenting financial plans to foreigners, using the knowledge and experience he gained from abroad. “I have lived outside the country at the age of 8, studying in the United States for 15 years and in the United Kingdom for 1 year. Because I have experience living with foreigners, I know what they are looking for, what the most important thing they look for is and how to present it to them.” said Mr. Chanond. Mr. Chanond has created a project for foreign investors under the name of Ananda. “I made this project presenting the whole system. The BTS Sky Train system, the MRT system, I visualized the bell covering it. The project that is near the BTS and MRT system will be called Ideo. The one farther from it will be called Elio. With more than 10 stations at that time, we planned to conquer it all and create a Business Model as a whole.”

Though it seems that the real estate is the hardest to disrupt, Mr. Chanond is looking at the changes waiting in the future. “In the future, land prices will be more expensive. The consumer bag is not growing, in which Sharing Economy will play a greater role. People will look at housing as a service.” In addition, the current success of Ananda, in which its prominent feature answers best to the equation Location X Mobility, where the condominium is located near BTS and MRT system, is convenient for people living under Bangkok’s traffic. This may be disrupted by the possibility of a private drones occurring in the future. For Mr. Chanond, he surely has a plan dealing with this change. “It requires many backup strategies. And more important, achievements in the past do not guarantee success in the future.”