Sound Designer and a well-designed life

Sound Designer and a well-designed life

There are various technical aspects of the production behind the scene of making a movie which surely includes all members of production since the before-production, during production, and after production. General people who are not related with movie-making may think of actors, movie directors, writers, and cameramen but there is another important section that makes “Movie” enjoyable, spectacular and makes your heart beat at the same wave is Sound Designer.


Today we introduce you a new career that people may not familiar of by interviewing one of the best Thailand sound designer, K.Nopawat Likitwong or K.Pun. He is the sound designer of many famous Thai films such as 4-Prang, 5-Prang, Pee Mak.. Phra Khanong, First Love (Sing lek lek tee reak wa rak), Hello Stranger (Guan Muen Ho), #BKKY, Die Tomorrow, BNK48: Girls Don’t Cry, The Blue Hour (A-na-ta-karn), and the latest, Malila: The Farewell Flower which is the winning Best Picture award of Thailand National Film Association Awards 2019 (The Royal Suphannahong Award). Moreover, he had a chance to collaborate with the world-class director, Wong Kar Wai, in the film named Ashes of Time Redux and The Grandmaster with the guaranteed Best Sound award of Thailand National Film Association Awards and the nominee in Best Sound Design from Hong Kong Film Awards for the films Operation Red Sea and Project Gutenberg. What is a Sound Designer? K.Pun described to us as assuming that there are 4-5 cows in a movie but one is more special than the others. In the picture aspect, we describe them from color but how to describe them in sound. Try to think about horror or sci-fi film which does not exist in the real world. We do not know the sound of a ghost or an alien. They are not real, and we need to design their sounds. Moreover, other existing sounds that we want the audience to see something or communicate with them in other aspects which also need sound design.

K.Pun stepped into this career because of his obsession in films. From the beginning of studying interior design and concept design which he had to learn art theory and many aspects of design that reflects from the movie. The more he watches them, the more he loves them. Eventually, he wanted to understand the film world and decided to go abroad for his further study in film studies. Meanwhile, he and his family did not have enough money but refer from his intention and support from family, his mother decided to get a loan for her son for studying as the Sound Design at Vancouver Film School, Canada. Today he has proved himself that it is a worthy investment!


After graduated, k.Pun started working based on his studies. Sound Design was not popular at that time (almost 20 years ago). There are only a few companies in Thailand for this type of work. K.Pun started with Technique Color company which is an American company in Thailand branch. This was the beginning of his practice in what he learned. He said he was so lucky that this company is an international company with high standard and high-quality equipment. After designing for international movies for more than 3 years he started to think of Thai movie. “I have wanted to work for Thai movie. I want to show my talent in Thailand. So, my friends, my family, and other people could see.” He decided to move to Kantana company where is the place that made him popular from “4-Prang, the movie”. It is 4 Thai horror stories from 4 directors which was shown in 2008. This made him had been recognized in Thai film industry. Then he had a chance to work with international industry and Hong Kong filmmaker, Wong Kar Wai. After success in the first international movie, K.Pun has also been recognized in international film industry. Life is not easy. Before this point, he has been over many humps that were very tough for him. In Hong Kong, the customer had a very high standard and requirement which he needed to work all day long. He was working until 5 in the morning and had to wake up to continue working at 9 in the morning for 3 months. However, it was a very great experience because he learned to plan a good start and have an attitude to think positive, he said. “We could not create just only simple work. We must have a high standard but if the customer is higher, we have to do it so”

Asking about his happiness of receiving the awards, he was over the moon to explained. “It is so delightful when work is done. It is not just done to me, but it comes out to the theater and I go watching it with other people. It feels so good to see the audiences enjoy, cry and feel excited with the movie. And it gets better when I came back home and saw my wife, kids, and mom watch it. Finally, when the end-credit shows, mom will point out and says that is my son name. This is funny and feels good at the same time.” This answer made us think about another side of this man life, as a child of a mother, a husband, and a father of 2 kids. This happiness and achievement can be shared with his family. 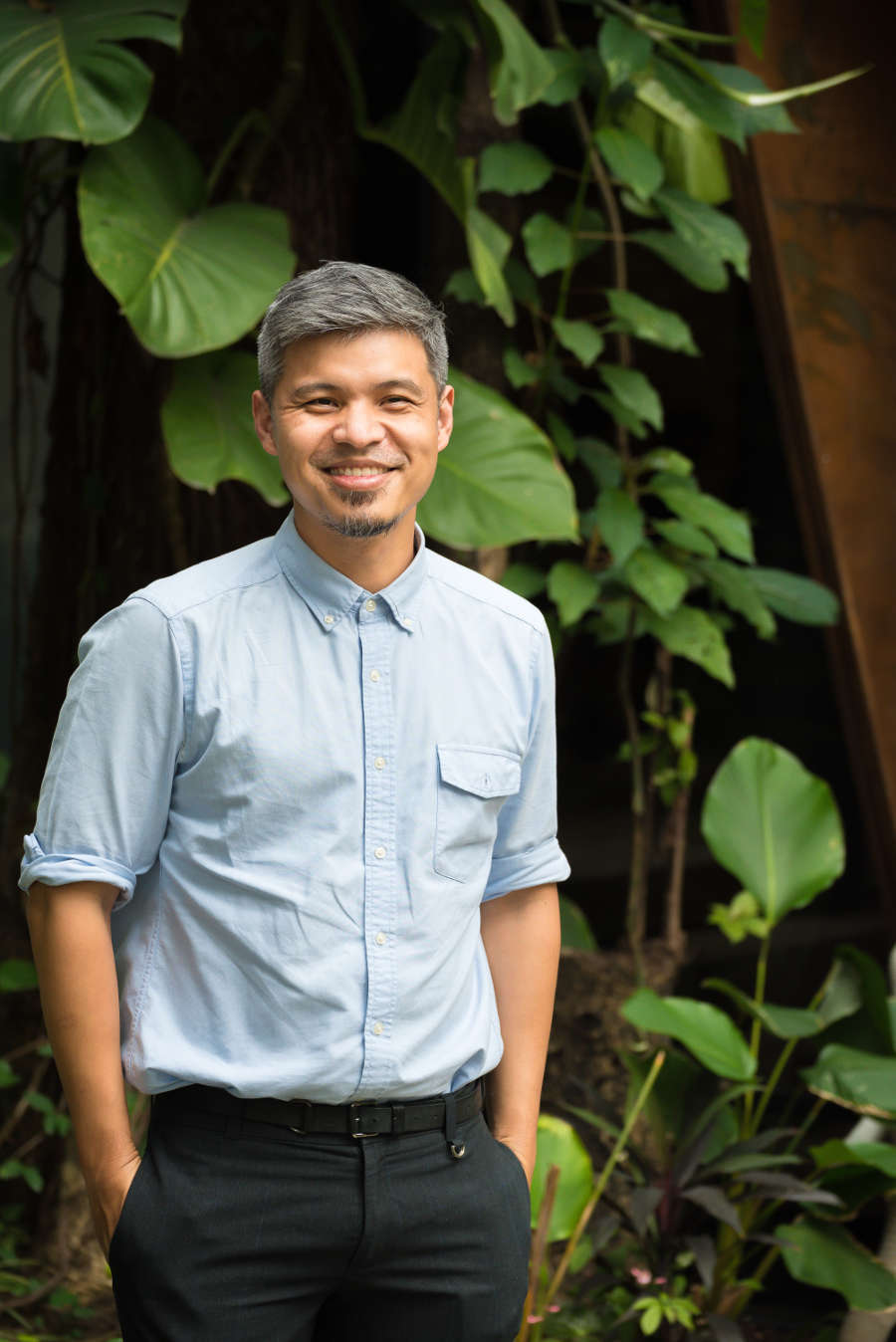 High demand comes with high responsibility. How could k.Pun manage his life for work and family? He told us that his timing attitude changed when the baby came out. He could not live the same life as a hard-working person anymore. So, anything that is not important will be cut off. An only the important one is focused. However, sometimes it is unavoidable to work hard, he will explain to his family to understand first and always update his current work life. How could he prepare his family stability? His answer is he had never thought of it before having a baby, no plan at all. However, after that, he must think of the baby first, their education, and their quality of life. So, he decided to buy a new house near a good school, has enough space, and great air quality and the environment. Another thing which he gives a lot of importance is their family health and he also started taking care of his health because he is the main role his family. To ensure stability and to protect his family, he bought many types of insurance whether health insurance, life insurance, and others. Because life is uncertain, financial planning is necessary because money is a supporter of many life goals.

And the last question was asked that what is the main success factor for the Sound Designer career? K.Pun quickly answered that patience is the key. Not only hard hard-working patience but also be able to be patient to listen. You have to listen and understand what the truly main wants of the customer are and to understand the problem. Work could not be good if we do not understand the main problem first. We have to listen, digest them and communicate them in a good way. Sometimes, the customer did not understand our work because of its correction and wrong words. However, it is our job to listen and explain them. Our work is a service job so, we need to have a good service-mind too. Passionate, determination and patience are the key but besides that what makes life worth living is the achievement which turns into your family smiles and proud. Work and family-life balance bring you the happiness and energy which reflect into work. However, to build balance, you have to manage time and surrounding people feeling whether the family and colleague by communicating with them. Not only work dedication but also life planning for the future of family stability. This is what we learn from K.Nopawat Likitwong, Thai Sound Designer with an international talent who brings happiness, proud and security to the family. As we said life is designable.