“Few days ago while taking a tour coach back home from Chiengmai, I saw such a long smooth paved road. How I am craving for a bicycle ride, let’s go biking to Chiengmai, shall we?” Naris, a friend of mine, a father of a son, dropped these sentences amid our drinking gang in a city karaoke room early in the year.

On that second I had to admit that I thought it was just an alcoholic talk and never had thought that in the next 6 months later I would be as wrecked as i could be, trying my best to push forward the bicycle’s pedals climbing up Doi Khun Tan peak on the way to my designated destination....Chiengmai.

Our bike trip programme was taking place in a long holiday during 12 August. Two months ahead, I had been practicing with my bike on holidays for at least 50 kilometers per day apart from biking to work about 10 kilometers daily. But Naris was different. He had no bicycle to pratice so biking on a longhaul trip was out of question, he thought that playing football with friends would do him good enough and bicycle was a stuff to be “borrowed from some of my senior friend”, Naris, the recent daddy of a son said.

This indicated some misfortune I should have known that the journey would be much worse than I have expected. 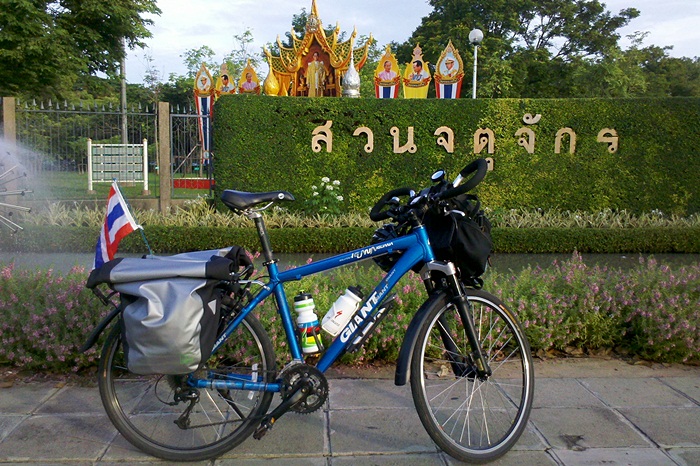 Travel day... We planned to take totally of 5 days and make 150 kilometres per day, that was what we should do. I started from Jatujak Park while Naris took off from his home in Pinklao area and our meeting point was Ayutthaya province. But in reality, by the time we met it was late afternoon already in Singhaburi province. Needless to say of our conditions, as limp as we could be for this was the first time of our biking for more than 100 kilometers.

We checked in at a semi-motel type hotel along the Asia road for a night of 300 Baht and treated ourselves with ice-compression to relieve leg muscles pain.

On our first day journey, at least there was some real nice moment happened when we were extremely exhausted before leaving Angthong province. An elder in a Toyota sedan lowered down the car window to ask of our destination and wished us luck, this was such a blessing for our biking enforcement. 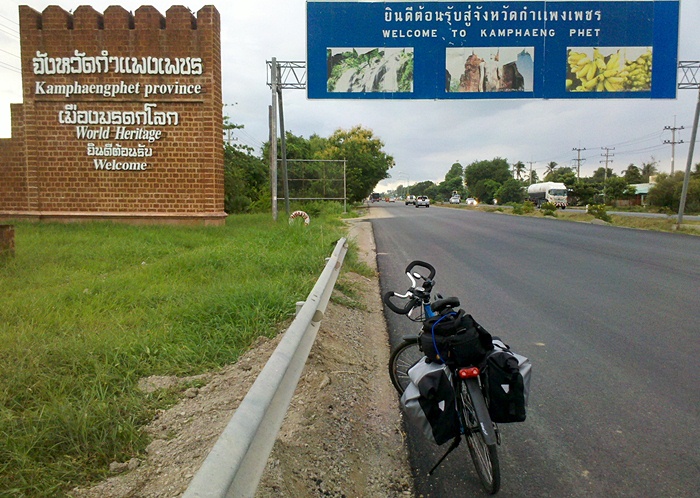 Day two: We left early from Singhaburi heading for Kampaengpetch province.Two bicycles slowly cycling along the lush greenery open field which contrasting to a clear bright sky in mid-August. We stopped to have some coffee to boost up energy at the gas stations, scented grilled voles gently drifting from shackes set aside periodically along the way. Naris’s bicycle tire got a blowout before arriving Nakornsawan province. I was in a long distance far ahead of him, he had no fixing equipment with him and no bike shop to be found nearby.  Finally, before dark Naris’s bike was put in the back of a hiring pick-up to be sent to Salokbat district where I had waited for him. We found some bike shop and had it fixed before checking in to our lodge. Of course, a motel named “Uturn Hotel” was our accommodation that night, luckily the motel owner is also a biker so we got a special biker’s friends rate from him. ^ ^ Day Three: Departed late morning from Slokbat, cycling through burning sunshine before rain encountering on Klong Wang Chao old road. We chose this secondary road as it was less traffic than main road with shady trees though very few gas stations for our stops but there were many fruits shacks to buy along the way. I could still remember so well the toothsome taste of dried mango pancake and stuffing banana in sticky rice of an elderly in a small shack on the road until now.


This should be the very first greetings day of the continuous hilly slopes to indicate that we were passing through the central low land. At dusk we arrived at Baan Tak district in Tak province and overnighted at “Kanyarat”  a boarding house at 350 Baht/night. “Lung Noi” a kind-hearted security guard allowed us to keep our bicycles in our room on the second floor. I am still very grateful for the kindness of the dinner restaurant’s owner “Baan Krua Arjaan” who invited us to stay at the accommodation on Ping river bank which was nearly complete on our next trip. Two big bunches of Longan also attached to our bicycle back grille....

“Just to refresh yourselves on the way” , it was said. Day Four : We left when the sun had not punched in yet for work. A vast empty road led to the entrance gate of Bhumibol Dam, a big house-sized bicycle situated magnificently in front of the dam’s name plate. An ice cream cart passed by, so each of us took a rest with a bar of cool ice cream in hand. The ice cream vendour told us that there were lots of bikers often passing by this route, so it was not a surprise for him to see us both.

“I came from Koraj, been selling ice cream in this area for 6 years ”  Wow...such a long way from home bro!

It was such a brutal sunny day, we had to stop more often than everyday. Sometimes a compassion and a malediction hand-in-hand came to my thought. What a pity, at this time instead of sitting in a comfortable cool airconditioned room in front of the office computer in the city, I was torturing myself amid this strong burning sun!  But at this point of no return, I had to resistingly carry on the task...just a bit more.

Naris himself was evidently having some injuries of biking a wrong size of bicycle 4 days in a row with slight fever as well. Fortunately, we stayed at auntie Ping’s large homestay at Kao Kha district and having a full rest before a D-day tomorrow.

Day Five: Early morning we recharged our energy with auntie Ping’s delicious pork boiled rice and chinese fried donut which was worth our while for just 300 Baht per person accommodation fee. Too early for Phra That Lampang Luang temple to be open, so we only paid our respect at the outer temple wall for the blessing before cycling up to Doi Khun Tan peak.

Right...our hardship today was Doi Khun Tan peak where we had to pass over with the strength of just our two legs no other external force. Every drop of sweat dripping on the road plus gasps for breath mixed with resonant sound of the derailleurs when changing of gears seemed to be the optimum enforcement used while pushing the pedals forwardly metre by metre, two metres...three metres. This was not a joyous ride as driving swervely left to right and switching back in a car with my Doi Khun Tan trip to Chiengmai at the end of last year at all. Worsened more, in some timing we had to inhale the toxic fumes from freight trucks which slowly passing us by, one by one.

Until we reached the Shrine of Khun Tan God, we then knew that the two-legged strength had accomplished its task by taking us to the top of the peak. After that, it then came the funniest part of all by releasing our bike to swiftly roll down the peak with a speed of 70 km/hour and all of our senses must be at best controlling of the balance as this was  a matter of life and death. Finally, we arrived Chiengmai safe and sound on the 5th day. We took some pictures at Tha Pae Gate as if it were a Victory Gate and looked for a moderate rental room near the city moat. I had a chance to bike around the town and felt envious for Chiengmai people that there are many small alleys here and there suitable for a real biking everywhere.

Interested person who would like to be a bike mania who bikes 100 km/day routing Bangkok-Chiengmai or just really want to know why this kind of peculiar person doing something like this, I would sincerely filter my real experiences to share with you as following;

Trying on a long haul journey on bicycle though it is the  same path as you may have taken before behind your steering wheel, the perspective of the surroundings will absolutely be not the same. You will be encountered with a kind generosity from people you meet along the road. You will realize that how much the people in central area are serious in building big size Buddha statues. You will realize that a motel is not serving for only single purpose. You will be tasting a freshly grilled vole.  You will be given kind supportive words from persons who accounted to your destination.  You will be in good care of the lovely bike shop at Baan Tak district.  You will be touched with the serenity of Wang water way which runs through the middle of Kao Kha district. You will be caught in a soft smell of land, rains and ear of grain along your path. You will be rendered with smiles and blessings from oldies people in their northern dialect amid the early morning mist.  Above all, you will realize what you are ‘capable for’ and ‘accomplish with’ far more than you have ever thought.

In this last paragraph, let’s go biking...Just for a bike ride to the main street, to the office or for a long journey... let’s do it. Riding a bicycle may grant the knowingness of your capability and accomplishment more than you have imagined of.