Prior to the Covid-19 pandemic, Cambodia, with 60% of its population of 16.9 million of working age, averaged 7.7% GDP growth per year (1998-2019), mainly from exports of apparel and textiles, agriculture, tourism, and foreign investment and trade, especially from Chinese investors.  This led to a leap in the availability of consumer goods and socio-economic expansion. In 2015, the World Bank raised Cambodia from a low-income country to a middle-low-income country.  In the past few years, high-rise buildings have been built in big cities like Phnom Penh and Sihanoukville, and popular restaurants, hotels, and retailer franchises have been established in the kingdom.

According to Pakaravee, the outbreak of the coronavirus has seriously affected Cambodia. Previously, there were concerns that the European Union would revoke Cambodia from the Everything but Arms (EBA) preferential tax scheme providing tax privileges for Cambodia’s textile exports to the EU.  The incentive was discontinued in August 2020 amid concerns that the nation would lose its competitiveness.  However, it was Covid-19, not the EBA, that instead stalled the Cambodian economy. For example, by prompting reduced demand for apparel in the global market and a slowdown in foreign investment, especially from China, including tourism, which comprised approximately one-fourth of the country's GDP.

In 2020, the government estimated GDP growth of minus 1.09%, while in 2021 the IMF / World Bank projected Cambodia's economy growing by 4%.  The forecast came just before the country was hit by a third wave of the coronavirus in February.  Therefore, the efficiency of the Cambodian government in handling the new outbreak will determine whether the economy will grow as expected or not. An insight into the healthcare business in Cambodia

With a positive perspective on Cambodia’s cultural and historical tourism, BDMS Hospital Chain founder Dr. Prasert Prasarttong-Osoth has identified business opportunities in Cambodia, beginning with an opening of a Bangkok Airways route to Siem Reap, where the world heritage site of Angkor Wat is located.  Before the Covid-19 pandemic, Cambodia was the fastest growing economy in ASEAN, and it is expected to recover once the crisis is over.

Dr. Narintara shared an overview of Cambodian business in the post-Khmer Rouge era, during which Cambodia's medical and healthcare system was destroyed. When the economy started to improve, medical services were not sufficient to meet demand, and Cambodians seeking medical care were often forced to seek treatment abroad in such countries as Thailand, Vietnam, and Singapore. Thailand alone accepted all types of patients from Cambodia at both public and private hospitals in Bangkok and border provinces, creating a “medical diaspora” of those seeking medical care unavailable in Cambodia.

Cambodia’s public health system is partly supported by France, which can accommodate certain demands.  However, there have been substantial unmet demands among more affluent people who are willing to pay more for better treatment. This presented a good opportunity for the BDMS Group to open the internationally accredited Royal Phnom Penh Hospital and Royal Angkor International Hospital as alternative choices for those who can afford treatment at those establishments, including businessmen and foreign tourists, who previously had to travel abroad to seek medical treatment.

Currently, the Cambodian government is trying to establish a social security system. The public healthcare system offers basic treatment at village or district hospitals.   As Cambodia is classified as a low-income country, there are hospitals established in the form of foundations by non-profit organizations from abroad and major hospitals also received donations from abroad.   China is the main country providing assistance to Cambodia through the government and its Ministry of Defense. The number of hospitals serving basic needs is sufficient.  However, there may still be some gaps in terms of quality and satisfaction compared to other countries.

During the pandemic the Royal Phnom Penh Hospital was the first hospital in Phnom Penh to accept COVID-19 patients, working closely with the WHO and the Cambodian authorities to offer a high standard of infection prevention and readiness. 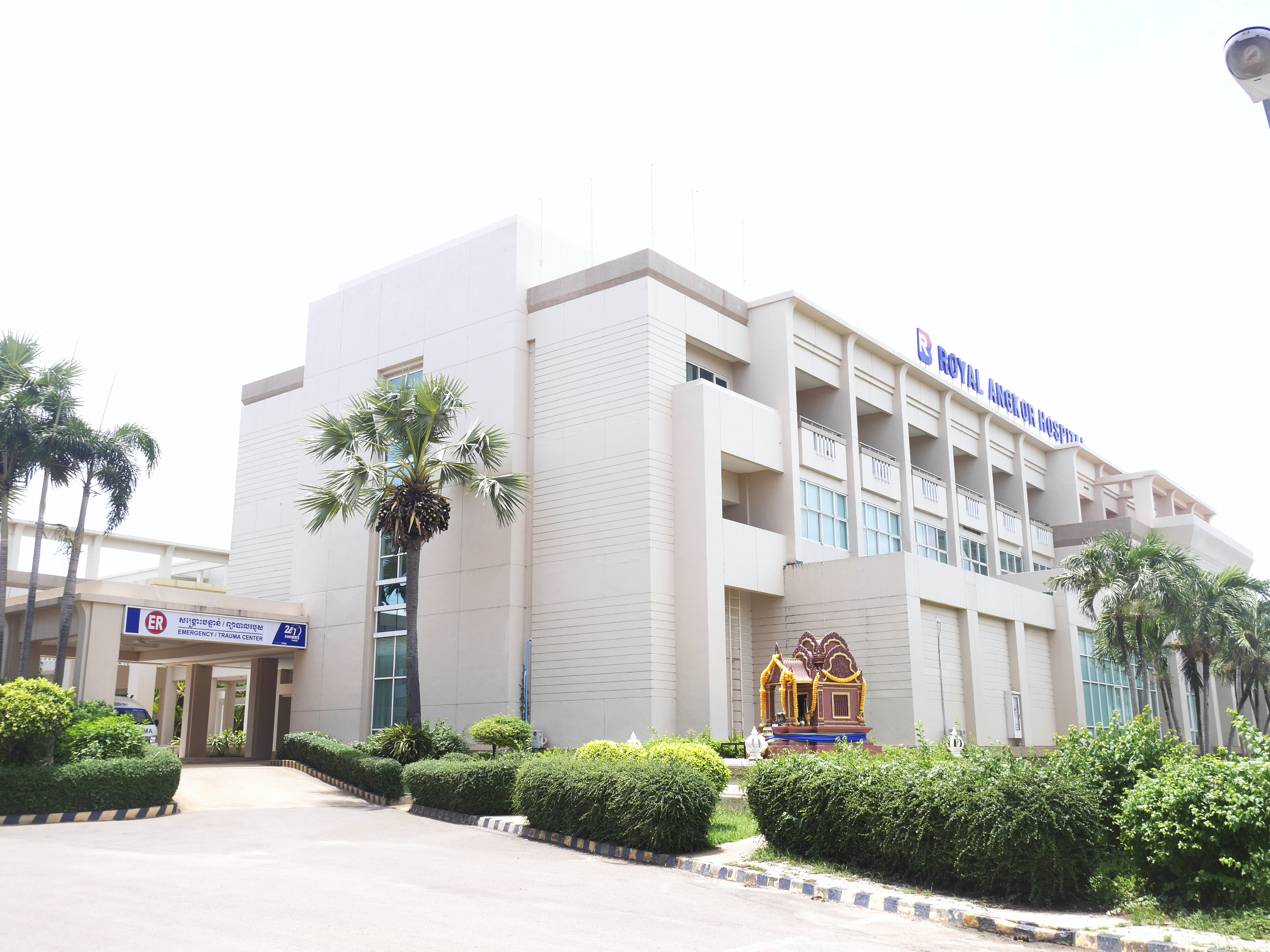 Cambodia’s first COVID-19 patient was a Chinese citizen who visited Sihanoukville.  At that time, the impact was still limited. The next case was a Japanese businessman who traveled back from Siem Reap to Japan and was detected by authorities in Siem Reap.  The Royal Angkor International Hospital organized a team with WHO, CDC, US Embassy, ​​UK Embassy, and Siem Reap authorities to conduct contact testing, take care of COVID patients, and prevent further infection. The third case was a British patient, infected in Kampong Cham, who was admitted to the Royal Phnom Penh Hospital, which was ready to accept Covid-19 patients.

However, people panicked about the emerging disease when it first arrived.  In March 2020, people would not come to the Hospital despite the Royal Phnom Penh Hospital is able to accept COVID-19 patients.  Dr. Narintara believed that the hospital’s medical standards were able to deal with the disease with its specialized doctors, medical staff, equipment, PPE suits, and medicine.  At the same time, the hospital worked closely with other BDMS hospitals, the WHO, and the CDC to continually assess the situation. Since then, more than ten foreign patients have been treated. Over the course of 2020, there were over 500 COVID-19 cases in Cambodia without any fatal cases.  The government-appointed Royal Phnom Penh Hospital as a COVID-19 test and treatment center.  During the third wave of the outbreak, the BDMS hospital group reduced its role (since 20 February 2021), and the Cambodian government has established funds for constructing field hospitals for comprehensive COVID-19 treatment, which have been well managed.

Currently, the Royal Phnom Penh Hospital treats both general and COVID-19 patients with support from the BDMS Group.  The hospital is ready to adapt to changing situations.  Last year's business was positive, with earnings among the top for the group.  Despite lockdowns, both hospitals continue to operate quite well compared to other businesses.  The Cambodian government has demonstrated that the situation is under control with widespread vaccination, ranking second in ASEAN after Singapore.  Businesses have adapted to the existence of COVID-19, and Cambodia is ready to move forward to reopen the country and develop the economy for a quick recovery. Pakaravee sees Cambodia as being strong in handling and preventing the pandemic.  The government has acquired 30 million doses of vaccines, prioritizing those living in the capital Phnom Penh before expanding to major cities such as Sihanoukville.  Another strong point about Cambodia’s efficient handling of the pandemic is the issuance of legislation mandating all military and police officers, justice officers, and political officials to receive the vaccination.  If they do not cooperate, their jobs will be in jeopardy.  Foreign workers with work permits were also vaccinated along with Cambodians.  Foreigners can also buy Covid-19 insurance and the government requires all arriving foreigners to a policy. However, insurance is not popular among local people as the premiums are considered high, but the business is on an uptrend.

Government support during the pandemic

The National Bank of Cambodia has issued measures to support financial institutions, such as reducing capital reserves, increasing liquidity, and encourage banks to support entrepreneurs by extending loan repayment terms and restructuring loans up to three times. In the beginning, support was provided only to four segments directly affected by the outbreak, comprising the tourism, textiles, construction, and logistics sectors.  Later, all businesses were allowed to seek assistance at the discretion of banks.  The measure was announced in March 2020 and ended in December 2020 but was extended until June 2021 and may be further extended until the end of 2021.

Recommendation for potential investors seeking to invest in Cambodia

According to Dr. Narintara, Cambodia is a country with a strong potential to become a growth generator in the future due to its small population, mostly young people and children.  Its strong alliance with China has played a part in enhancing the country's development, such as new airports to be constructed in Phnom Penh, Siem Reap, and Sihanoukville and the development of Sihanoukville along lines similar to Shenzhen, which is expected to house the digital industry. The change is expected to rebrand Sihanoukville’s image from a casino city to a high-tech city and an outlet for China.  From a historical perspective, China and Cambodia have been close since ancient times. In the past, Cambodia served as China's port for shipments to India, the Malay Peninsula, and Indonesia.

In addition, Cambodia has received large investments and grants for infrastructure projects from South Korea and Japan, proof that Cambodia will develop even further post-pandemic.  The healthcare business in Cambodia is also attractive, as Singapore will be joining the market.  The Royal Phnom Penh Hospital has also been announced as a medical hub in Indochina with future investment plans.

Dr. Narintara added that Cambodia’s digital economy at present features a wide range of digital banking that has been widely adopted for money transfers and payments.  Cambodia has the potential for exponential growth, and with the country being in the early stages of development it offers many opportunities for entrepreneurs who make the first move.

As an SCB subsidiary, the Cambodian Commercial Bank or CCB has been in business for over 27 years. Headquartered in Phnom Penh, CCB operates three branches in major cities, namely Battambang (connected to Thailand’s Sa Kaeo Province), Siem Reap (a tourist city where Angkor Wat is situated), and Sihanoukville, which is Cambodia’s second economic city and port city.

Source: Cambodia Insights and Update 2021: Insights into the Cambodian Economy through the Healthcare Perspective broadcast on Facebook: SCB Thailand on May 29, 2021