Looking back to 2009-2010 you might be so curious what would the square symbol “QR Code” or Quick Response Code get involved with our daily living.

During those years QR Cod was only be of a smart phone to focus on newspaper or magazine and advertising signs to instantly get information from linked Website, pictures and moving pictures without touching any alphabet.  At that time we were all impressed by its ability but never expected it would influence our life except for finding “more friends” by picture taking through application LINE.

Until 1-2 years ago in China that QR Code has become the most popular matters since the QR Code signs appear in front of all shopping places namely fresh markets, food centers and even street shops.  “Mobile Payment” is the new payment route for China towards the “cashless society”.  Even street beggars or wanderers and musicians also attached QR Code signs at their money boxes for donation!

All of these happenings have been driven by the two main service providers namely WeChat and Alipay.  Accordingly, in 2016 payment by mobile phone in China was as high as (only) #5.5 US. Or approximately 27.5 ml. baht.  Well, just only that much!


If we’d like to make it closer to our Thai situations, in 2016 the convenient store-Seven Eleven started to show the Alipay sign to communicate with more than 10 million Chinese tourists to easily pay by their mobile phones, without worrying whether they had cash for shopping.  Even in the Korean popular series their players also showed QR Code payment for shopping the sponsor’s brand of such series! It looked so easy that we felt like being one of them. 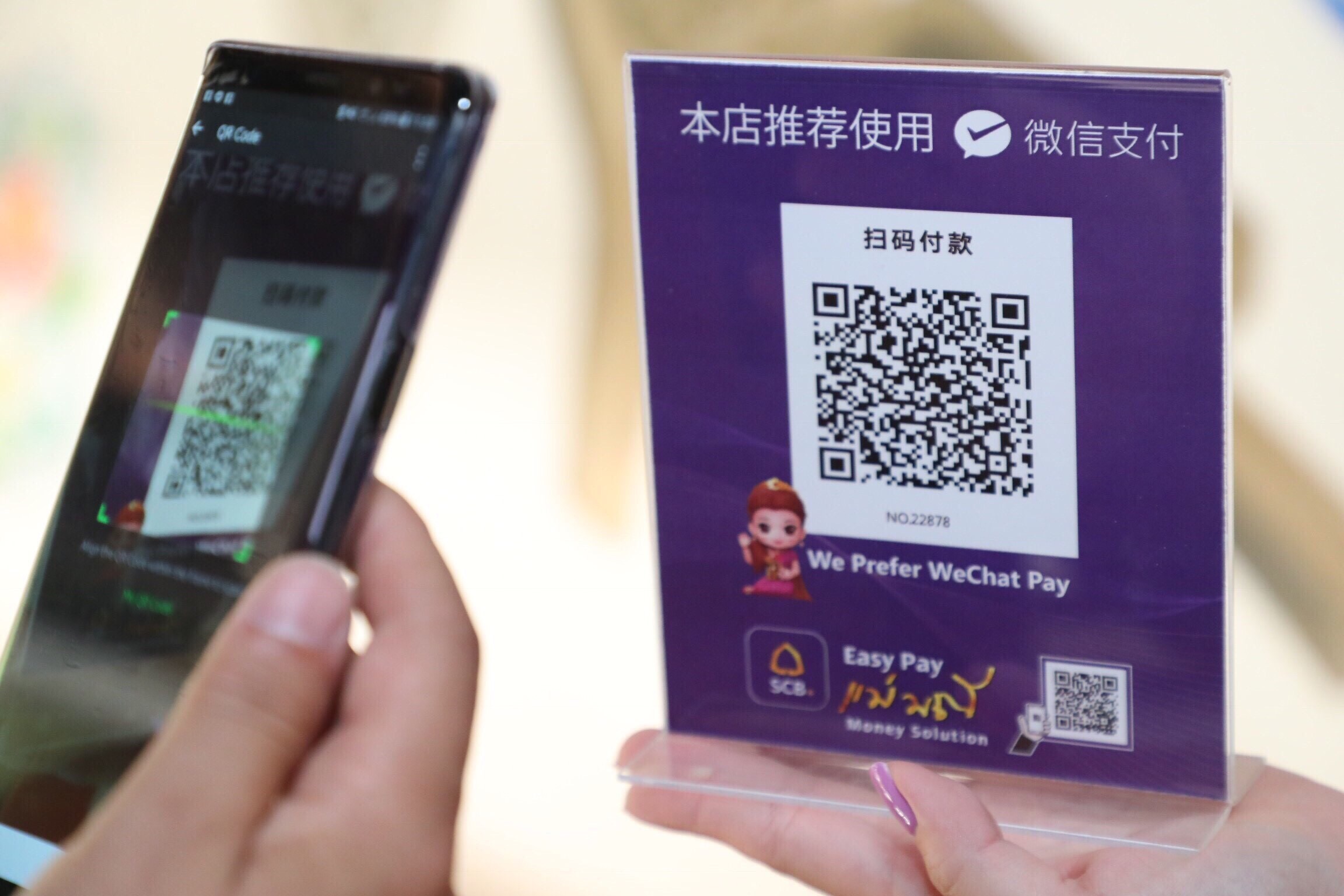 QR Code is, thus, not the matter unknown among Thai people.  Instead it has totally overturned our “Financial World” by its easily approach of cashless to persuade the new generation into its association.  Several big banks have started invading both TV and online campaigns to influence business owners nationwide, both big and small enterprises, to start QR Code services attached with bank accounts, ID card number or mobile phone number with more than one bank under certain prompt pay rules by which QR Code sign will be given to enhance easy payment by customers into either the saving or current account.  For instance, the Money Solution of SCB – the system that helps solving problem of holding bank notes of smaller value for required changing.  No worry anymore if the cash received would get lost since everything would be managed by the set system.

According to the buyer’s perspective this system is as easy as “fingertip’s role” as an explanation for QR Code scanning by mobile phone to transfer money for online shopping wherever it is… at the fresh market, weekend market, canteen, coffee shop, taxi, bus or even for motorcycle riding.

QR Code benefits also include better financial disciplinary since paying through mobile phone will keep reminding us that its your own money for which you would be more careful to spend the “future money” by credit card.

As technology is now serving us this fingertip convenience then weather we would enter the new financial world or not depending on both sellers and buyers.

Makes it easy for you to transact anytime, anywhere using your computer or mobile phone. Make your life easier.