Keeping social distancing and working from home may make people boring, lonely, and isolated. How can we relieve loneliness, isolation or improve communication between family while parents working at home and children study online? Aoki Shunsuke, a Japanese Robotic Innovator who is passionate about lovely stuff since he was young. He has developed personal and cute robots with a human touch that can fulfill family relationships, deal with loneliness when working alone at home, and for children to use as a device for monitoring the wellbeing of isolated parents. Those robots help connect with long-distance and ease people’s loneliness in the New Normal.


Mini robots are invented to help communication easier for children and seniors uncomfortable with the smart phones, and pair with sensors installed throughout the house. The robot reports all the movements of elderly parents who stay home and their children will get real-time results. This smart robot is created by Start up in Tokyo. Aoki Shunsuke, the owner and Robotic Engineer who is fond of lovely stuff views that robotic communication aids will build relationships and happiness for humans, especially an adorable robot that helps boost successful communication and brings contentment to people. Shunsuke thinks that this robot is a great solution for human interaction. 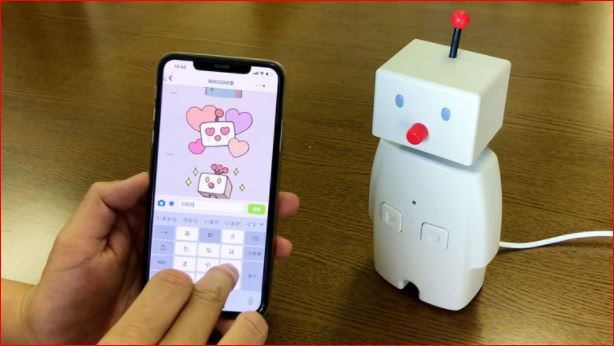 In a family that parents with kindergarten kids are working from home, a Mini Robot is placed in the living room as the center of the house. The robot communicates with the mobile phone app by texting messages and this robot will talk exactly like those text messages. For example, the father is in the living room for the online meeting but his daughter is watching TV which is very loud. Instead of telling her personally, he texts messages via mobile phone, and then the robot tells her “Keep the voice down a bit, I’m in the meeting”. The robot can convert text to speech in a lovely voice. That helps speed up communication and his daughter is even more fun to talk to the robot. Or when the mother leaves home for the supermarket and is on the way home, she can order the robot to tell the family that “I’m done and is on my way home”. Besides, children with no mobile phone can text messages to their parents by talking to the robot. After tapping ‘Send’, the robot will send a message to the parents’ mobile phone so the children feel they can take care of themselves easily. Additionally, we can set up a time for children’s activities and the robot can remind us of that, for example; It’s time to eat, It’s time for a shower, It’s time for homework, It’s time for bed. Many users said that the robot strengthens good relationships, creates joyful moments, and adds a colorful atmosphere among family members.

Not only delivering lovely communication in the family, this robot also helps take caring seniors who live alone. A family that daughter works in another city leaving the elderly mother alone at home. The daughter installs home sensors in several points like entrance, home locker, toilet, refrigerator, and more. If there’s movement or walking pass sensors area, the robot will send a real-time alert to her mobile phone. She feels more relaxed because she knows that her mother opens the fridge which means she can eat as usual. If the door is open and closed, she knows her mother still enjoys doing activities and when her mother arrives home. She’s happy to know her mother's progress even though they’re far apart. Her mother doesn’t feel like being left out as the robot is by her side. When she’s up at night to the toilet, the robot’s eyes will shine the light and look at her. She says that she feels that she no longer lives alone.

Additional to the mini robot, Shunsuke also creates a round fluffy robot with a tail wagging when rubbing its body. In this era, most employees have to work from home independently and can hardly avoid loneliness. A woman said that rubbing this fluffy robot can relieve her feeling of isolation. Many people may wonder why the inventor doesn’t create cat or dog robots. Anyway, the creator is thinking far beyond that as each individual has different memory or preference in animals. When rubbing the round robot with its tail wagging, the robot owner may think about the cat and imagine that the robot is a cat, while dog lovers may think that the robot is a dog. Thus, this round fluffy robot is created for anyone to develop an imagination freely, for example; a woman employee said the robot reminds her of the dog that she once had. In view of the manufacturer, they’ve produced the product to meet preference and various needs and left room for the users’ imaginations.


Social distancing may create loneliness but a good thing is you have more time for other activities because you no longer waste time traveling, and you may arrange your time to invest in Mutual Fund. SCB Easy invest offers a variety of funds from well-known asset management companies with attractive investment policies so you don’t have to open a separate accounts. Please study more information at http://www.scbs.com/easyinvest

Confident start with outstanding funds selected from Leading asset management companies across the country. Answer all your needs without limits.